KIDS’ BLOG! The Invention of the Wheel: How the Ancient Sumerians Got Humanity Rollin’!

When we think about the invention of the wheel, the picture that jumps into our minds is the wheel from a car or maybe an ancient Roman chariot.  The earliest wheels, however, were much different than 21st century wheels or even those used in first century battles.

The wheel was invented by the ancient Sumerians. They lived in the land between the Tigris and the Euphrates Rivers in the Middle East. Much, much later this land became part of the country we call Iraq.  The Sumerians were the first people to develop a written language.  Extensive studies of their writings have led archaeologists and historians to also credit them with the invention of the wheel.

The concept of the wheel actually grew out of a mechanical device that the Sumerians had invented shortly after 3500 B.C.—the potter’s wheel.  No other civilization of their time had one.  This was a heavy flat disk made of hardened clay.  It was spun horizontally on an axis to allow the potter to form evenly shaped jars and bowls from wet clay.    The Sumerians didn’t, however, simply turn this clay-splattered wheel on its end and hook it to a wagon to make a wheel.  Instead, the concept of the wheel went through many stages of development before it became a practical method for moving heavy objects from one location to another.

The Sumerians’ First Wheel:  “The Roller”

The wheel started out as a man-made log.  The Sumerians figured out that if they could prop the edge of a heavy crate up onto a long log-shaped object, they would be able to roll the load over the object and move it forward.  They would then place a second log under the front edge of the load and continue rolling it.   Believe it or not, this was the first wheel. Interestingly, the Sumerians did not use large logs cut from trees.  Unfortunately, trees with thick trunks did not grow where they lived.  This land was very dry except for a few swamps near the rivers. The only kinds of trees that grew there were wild fruit trees and soft palm trees.  Neither of these had thick, straight trunks that could be cut down and made into logs.The Sumerians, however, were very creative and didn’t let that stop them.  They cut flat planks from the trees and fastened them together into the shape of a log.  They then chiseled the wood down so that it would be curved enough to roll.  This was the first “wheel.”

The Sumerians’ Second Wheel:  “The Sledge”

Being very practical people, the Sumerians were not satisfied with “The Roller.  They wanted an easier way to move heavy loads.  Their next invention was called “The Sledge.”  It did not have a roller.  Instead, they took their crate and attached a base with runners under it so that it resembled a large sled.  The front edges of these runners were curved up like skis.  Because of this curve, the runners slid more easily across the ground.  There was also a straight crosspiece that connected the two runners in the front.  It braced the two runners and was used as a handle for pulling and guiding the sledge.  It took a lot of pushing and pulling, but people were able to move their loaded crates on the runners. Even though this device looked nothing like a wheel, it accomplished the purpose of a wheel.

This sledge worked well unless the terrain was rocky or bumpy.  The runners kept catching on rocks and tree roots and jerking to a stop.  The Sumerians then decided to combine their roller wheel idea with the sledge idea and placed the sledge on top of rollers.

The Sumerians’ Third Wheel: “A Sledge on Rollers”

This type of wheel worked well as long as the ground was flat.  On hillsides and inclines, though, the runners of the sledge kept inching their way off the roller as it moved. Once the runners started slipping sideways, it was almost impossible to inch them back into place. This was a serious problem when you were transporting something very heavy.  Too many times, one of the runners slipped off the edge of the roller and the whole load tipped over.

But the once again Sumerians would not give up.  There had to be a better answer.  They noticed that after a roller had been used for a while, it started to get grooves where the runners rubbed against the wooden roller.  They came up with a terrific idea: Why not actually cut grooves where you want the runners to ride on the roller?  This would keep them in place.  The Sumerians quickly cut grooves into all their rollers and ended up with a much more efficient wheel.

The Sumerians’ Fourth Wheel:  “A Sledge on a Grooved Roller”

Still, to move loads this way was tiring and required lots of people.  Just moving the rollers to where they had to be used was an exhausting chore.  The Sumerians reasoned that it might not be necessary to use the whole heavy roller.  Only the ends were actually needed to prop up the load.  What would happen if they cut out some of the excess wood in the middle of the roller and just left the two ends connected by a narrower middle piece?  The middle piece or “axle” connected the two ends and at the same time carried the load.  To keep the sledge in place, the Sumerians attached four pegs (two on each side of the sledge).  The “axle” rolled between the pegs and this kept the sledge in the right position on top of the axle. The wooden ends of the roller were what we now call “wheels.”

The Sumerians’ Fifth Wheel:   “Two Wheels With a Fixed Axle Spinning Between Pegs”

What a difference!  The Sumerians now had a lighter-weight cart to carry their loads.  They tinkered with their new invention and decided to get rid of the pegs.  They added a piece of wood to each side of the cart.  These pieces hung down under the cart.  They then drilled holes in these pieces so that the axle could easily roll inside them. These extra pieces were called “bearings” because they bore the weight of the cart.  Now the sledge was permanently attached to the axle and the wheels.

The Sumerians’ Sixth Wheel:  “Two Wheels With an Axle, Attached With Bearings”

What the Sumerians ended up with was a two-wheeled cart.  This was later developed into a chariot that could be pulled by a horse or donkey.  Other surrounding civilizations copied the design and quickly adapted the wheel to the needs of their own cultures.

Who would ever think that a device meant for making pottery would be the inspiration for one of the greatest and most wide-reaching inventions of mankind?  Think about how many ways wheels are used today—not just for transportation, but for manufacturing, home appliances and recreation.  We are in debt to the Sumerians for their ingenuity and persistence.  Imagine how different our world would be if no one had ever invented the wheel!

Build Your Own Wheel:

Click on the appropriate grade level below to download instructions for building your very own wheel model! 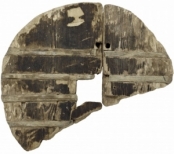 The world’s oldest wheel was found in 2002 at an archaeological site approximately 12.5 miles (20 kilometers) south-west of Ljubljana in present-day Slovenia. The wheel is made from oak and ash and has a radius of 27.5 inches (70 centimeters).

Critical Thinking: Use the links below to research the wheel and the area in which it was found. Imagine how the wheel might have been used.

Drawing: Draw a picture of a cart with this wheel on it. Fill the cart with likely objects that would have been found in this place and time. Draw the surrounding areas and the people who would be using the cart. See how many details of their lives you can include, such as animals, clothing style, types of carts, local architecture, etc.

13 responses to “KIDS’ BLOG! The Invention of the Wheel: How the Ancient Sumerians Got Humanity Rollin’!”