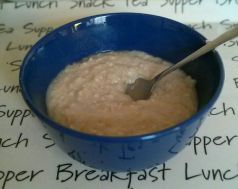 It’s beginning to look a lot like winter! As snow blankets the ground and temperatures start to plummet, there’s nothing better on a chilly morning than a bowl of piping hot porridge. And if you want a dose of history with your breakfast, AntiquityNOW is here for you. This recipe, courtesy of On Agriculture by the Roman, Cato the Elder, was taken from the Phoenicians during the Punic Wars. It is considerably more exciting than the boring Roman version, also printed in On Agriculture.

While porridge is filling and delicious, the topic can also be a bit boring. We could have tried to jazz it up, but Pass the Garum already did an incredible job taking this ancient breakfast and exploring the more titillating parts of its history, namely Rome’s conquest of Carthage. So, instead of trying to reinvent the wheel (you can read our post KIDS’ BLOG! The Invention of the Wheel: How the Ancient Sumerians Got Humanity Rollin’! to learn how the wheel was invented), we’re directing you to Pass the Garum’s 6-part series on Punic Wars and Porridge.

Or, if you’re anxious to get to the warm, hardy delectability of Punic Porridge, scroll down and get cookin’!

To discover the surprising varieties of porridge, click here.

And what mention of porridge could not include references to two of our most notable porridge-related tales:

*Recipe courtesy of On Agriculture by Cato the Elder.