Hot Chocolate: Gift of the Gods Since 1900 BCE

If you think hot chocolate is just a modern day treat, you may be surprised to discover that the Maya people in Northern Belize were drinking hot chocolate as far back as 600 BCE, and even more intriguing, other evidence supports the use of chocolate much earlier than that.

Although the Mayas have often been credited with discovering the varied uses of chocolate, there are many who now assert it was the Olmec people, a parent civilization of the Mayas, who deserve this credit. The Olmec lived along the Gulf Coast of Veracruz, Mexico from 1500-400 BCE. In their book The History of Chocolate, Sophie and Michael Coe explain the Olmec crushed the cacao beans, mixed them with water and spices, and then added chilies and herbs for a spicy concoction.  Other options included adding honey for a sweeter drink and flavorings from flowers and vanilla.   In fact, for much of its history chocolate was enjoyed as a drink, often with more piquancy than sweetness.

Still, there are other theories which say that chocolate was being enjoyed before the Olmec. In 2007, researcher Terry G. Powis and his colleagues were surprised to find residue of the Theobroma cacao bean in ceramic vessels retrieved from the Mokaya Archeological site at Paso del la Amada, in Chiapas, Mexico.  This site dates back to 1900 BCE—placing the discovery of cocoa far earlier than anyone ever imagined.

GIFT OF THE GODS

In the history of chocolate, the Mayas were unique in one important aspect: They were the only people to make cocoa beans central to their entire civilization. From religion and rituals to daily diet to using cocoa beans as currency when trading with neighboring peoples, they quickly realized the value of the beans, integrating them into their everyday lives, into their mindset, and consequently into their history.

After harvesting cocoa beans from the melon-like fruit of the cacao tree, they would dry the beans for about a week, allowing them to ferment, which enhanced the flavor. Then they pounded the beans into a paste, which was used to make several types of beverages and gruel. Cocoa by itself is very bitter, similar to baker’s chocolate squares or plain dark cocoa powder, so the Maya flavored their hot chocolate with spices, chili peppers, and later with honey from the beehives they cultivated. They never mixed the cacao bean paste with milk to make hot chocolate the way we do today. Instead, they used hot water to create a bitter cocoa drink that could be served hot or cold. 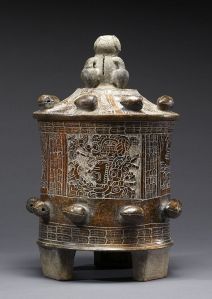 Decorative vases, art and murals from that time period tell us that a frothy chocolate drink was served to the bride and groom at Maya wedding ceremonies and, of course, served frequently to Maya royalty.  Most importantly, chocolate was served to the Maya gods. The name of the cocoa bean itself—Theobroma cacao—means, “food of the gods.” The cocoa bean was deeply ingrained in the Maya religion. The cacao tree is even mentioned in their sacred book and creation story, the Popol Vuh. They gave cocoa bean offerings to their gods, entreating them on a personal level to bless marriages, to supply individual needs and even to keep their bees healthy and producing honey.

Chocolate and cocoa beans also played a vital part in Maya royal burial rituals. These elements were presented to provide comfort for the deceased in the afterlife. Inside burial tombs, archaeologists have found vases painted to show Maya gods fighting over cocoa beans and kings being served chocolate delicacies.

The Mayas believed that their lives were inseparably linked to the nature all around them and the sky above them.  It is easy to understand why they believed in the medicinal value of chocolate and how the cocoa beans were a gift from their gods to make their people strong. Today, science has proven them right. We know now that cocoa powder and dark chocolate contain powerful antioxidants that build up our immune systems, and that cocoa also makes our arteries more flexible, further protecting us from high blood pressure. Using cocoa as a major component of their diet fortified the Mayas against illnesses.

Maya hot chocolate recipes have been passed down through generations. You can find a delicious recipe here, along with several other Maya recipes including a frozen version of the Maya hot chocolate. Enjoy!

Do you have a chocolate fact to contribute to AntiquityNOW?  Maybe you’d like to share your opinions/pictures/videos about a favorite movie, song or short story (original or otherwise authored) featuring chocolate.  Or how about that decadent recipe you pull out to impress the chocoholics in your crowd?  We want your ideas, perspectives and any other delicious tidbits about all things chocolate.  Please email us at info@antiquitynow.org with your blogs, recipes or just facts that we can showcase on our website.