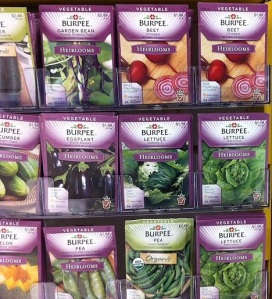 Ever been shopping in the produce section and seen a flashy display for “HEIRLOOM TOMATOES!”   Wonder what’s so special about these tomatoes?  The answer might surprise you.  Heirloom fruits and vegetables are grown from seeds that reach all the way back to ancient times.  Over the millennia, these seeds have taken on enormous value.

Kent Whealy, executive director of the Seed Savers Exchange, had this to say about these extraordinary seeds:

“The seeds planted each year by gardeners and farmers are living links in an unbroken chain reaching back into antiquity. We cannot possibly comprehend the magnitude of the history contained in these seeds, in terms of what has gone before and what may potentially come after our brief involvement. Our Neolithic ancestors began domesticating plants 10,000 years ago with the simple act of replanting seeds that had been gathered for food. Whenever gardeners begin to save their own seeds, they also become part of this ancient tradition.”[1] 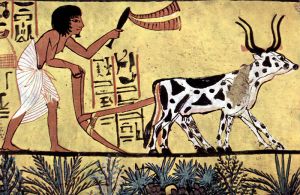 Around 12,000 years ago humans began a transition from a hunting and gathering lifestyle to a more stable life of agriculture.  They settled down and began planting and growing their food as well as domesticating animals.  This was called the Neolithic Revolution.  Eventually they began choosing and saving seeds from plants that were the most productive, the most flavorful, the hardiest and the ones that retained their edible seeds the longest.  Generations of this selective breeding led to stable crops that could be counted on to produce the food for entire villages.

Although the first domestication of plants and animals is believed to have taken place in the Middle East, it took place independently in civilizations all over the world during roughly the same time period (10,000-5,000 BCE).  Each group arrived at domestication by different routes, but all were successful at domesticating a unique set of plants as can be seen in the chart below.[2] 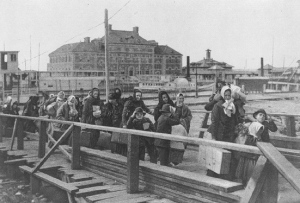 Families passed these seeds down from one generation to the next for centuries, and when people began emigrating to other parts of the world, including the Americas, they brought their precious seeds with them.  In fact, they were so important that their owners often sewed them into clothing so that they would not be confiscated by Ellis Island authorities.  These seeds would sustain them in a harsh new world and served as reminders of the past.[3].  According to gardening columnist, Jim McLain, by the 19th century, the seeds had become “their heirlooms just as much as the family Bible and family photos” were.[4]  Often the names of the seeds hinted at the history behind them.  Names such as Aunt Ruby’s German Green tomatoes, Dragon’s Tongue green beans, Moon and Stars watermelon, Garden Peach tomatoes, Cherokee Trail of Tears beans and Radiator Charlie’s Mortgage Lifter tomato set each crop apart.

This shot of Kalamazoo in the 1870s shows what backyards used to be: places to work, not play. With livestock and outhouses, they weren’t ideal for entertaining.

When the Industrial Revolution began, many farmers left the field and moved into the cities in search of a different and better life.  They brought their seeds with them and planted backyard gardens.  These gardens came in handy once again during the World Wars when supplies were limited and families needed to find ways of sustaining their food supplies.  According to Michael Pollan in ”Farmer in Chief,” more than 20 million home gardens were supplying 40 percent of the produce consumed in America by the end of WWII.”[5]

When the economy rebounded after World War II, backyard gardening waned in popularity; however, heirloom seeds soldiered on.  Perhaps because of their intense historic and emotional value, these seeds were not lost when family gardens all but disappeared.  Although hybrids, grown for their uniformity and resistance to disease among other things, have become more popular with many farmers, heirloom seeds continue to hold their place in our society.  They are known for producing extremely flavorful crops that often develop inborn disease resistance.  Perhaps most importantly, they connect us to our past as a living link to our ancient ancestors.

So the next time you see a sign for heirloom vegetables in your produce section,  pay the extra dollar and enjoy a piece of history. Or, if you’re feeling really adventurous, order some heirloom seeds and plant some history in your own backyard.

One response to “Heirloom Seeds: Growing a Piece of Ancient History”