Tiny, red and packed with flavor, this delectable little fruit has deep historical roots. Heart-shaped and fragrant, the strawberry has inspired poets, writers, painters and chefs with its plump perfection. William Allen Butler said it best, “Doubtless God could have made a better berry, but doubtless God never did.”[1] Today we’re sharing a unique strawberry soup recipe with you. But first, let’s explore this ruby berry’s origins.

The strawberry had humble beginnings. In prehistoric times, strawberries were tiny and grew in the woods where they would often be covered by a thick overgrowth. The season for strawberries was short and so they were not a particularly valuable food source for man. There is evidence, however, that prehistoric man did eat some strawberries. Seeds have been found at Mesolithic sites in Denmark, Neolithic sites in Switzerland and Iron Age sites in England.[2]

In ancient Greek and Roman times the strawberry continued to grow wild, but there was a greater appreciation for the fruit though it was consumed mainly for medicinal reasons. It was believed to relieve digestive issues and is still used today by making a tea from the leaves to calm the stomach.[3] The Romans believed it could treat a host of symptoms including “melancholy, fainting, all inflammations, fevers, throat infections, kidney stones, halitosis, attacks of gout, and diseases of the blood, liver and spleen.”[4]

In Greece, there was the Arbutus or Greek Strawberry tree whose fruit, according to Bertrandon de La Brocquière, a Burgundian pilgrim, is “somewhat bigger than our largest cherries, and of the shape and taste of strawberries, but a little acid. It is pleasant to eat; but, if a great quantity be eaten, it mounts to the head, and intoxicates.”[5]

The strawberries enjoyed in Rome were also wild-growing and were discussed by several poets and writers of the day. Virgil mentioned them in his Eclogue III in 37 BCE saying, “Ye boys that gather flowers and strawberries, Lo, hid within the grass an adder lies.”[6] In Pliny’s Natural History he mentions the wild strawberry that grows on the ground and distinguishes it from the tree variety.[7] In Rome it was referred to as fraga because of its delicious fragrance.

In the 1300s the French began to bring wild strawberries into their home gardens and cultivate them. In 1368 King Charles V had fraise de bois (Fragaria moschata) brought in to his Louvre gardens and shortly after the Duke of Burgundy added them to his Dijon estate.[8] The French strawberries were tiny, but exquisitely fragrant with “a Concord grape-like flavor and notes of clove, similar to the Alpine Strawberry known to Europeans today.”[9]

Not to be outdone, the British were cultivating their own woodland strawberries called Fragaria vesca. In the 1500s the Tudor dynasty took the fruit to all new heights when Henry VIII’s right-hand man Cardinal Wolsey suggested they be served with a dollop of cream. Today, strawberries and cream continue to be a prized British dish.[10]

When explorers arrived in the New World they found that Native Americans had already been enjoying their own strawberries for centuries. The Seneca held a strawberry festival each year to celebrate the ripening of the wild fruit. A drink was made for the festival’s ceremony by mixing the berries with water and maple syrup.[11]

Today, the strawberry is grown in every state of the United States and all over the world. Each region has its own special way of enjoying the little berry. In France, they serve a “soup made of strawberries, sour cream, borage and sugar to newlyweds” because they consider the strawberry to be an aphrodisiac. In the southern United States, you’ll find Strawberry Shortcake served with mountains of whipped cream. During the Wimbeldon tennis matches, strawberries are the favorite snack of viewers.

So whichever way you prefer your strawberries, remember its long journey from antiquity.  When you bite into the luscious red flesh and savor the tart sweetness of a strawberry, you’re experiencing a taste enjoyed through the ages. 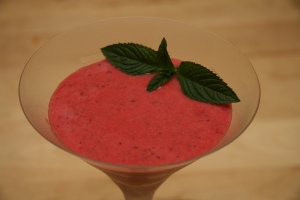