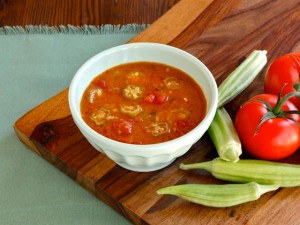 Small, green and oddly shaped, it is often called “slimy” by those who don’t appreciate its hidden virtues. But this is a vegetable that has staying power. Indeed, the okra has persevered for centuries, adapting to new recipes and new cultures, crossing oceans, filling the bellies of the hungry and even hydrating the skin. Today we bring you a hearty recipe for okra soup developed over the years by borrowing from the cultures that know and love this die-hard bit of nourishment. First, let’s take a look back to see how the okra began its journey.

Little is known about the exact time when okra first made its appearance, but the likely region is an area that includes present-day Ethiopia, the mountainous or plateau portion of Eritrea, and the eastern, higher part of the Anglo-Egyptian Sudan.[1] Okra has grown for millennia along the fertile banks of the Nile and spread throughout Western and Central Africa with the Bantu who migrated from Egypt around 2000 BCE.[2] Travelers, conquerors and missionaries did their part over the centuries to take it from its home in Africa where it had become a dietary staple across land and sea to India and China. It was the trans-Atlantic slave trade that would carry it to the New World where it found a second home in the French colony of Louisiana. “Along the entire length of the 3,500 mile coast exploited by the trans-Atlantic slave trade, okra was grown and cooked with other vegetables or rice and made into soup” so it is not surprising that this is how it made its way to a new continent on which it would be embraced.[3]

For enslaved cooks, okra was a common tie that bound them to their fellow slaves even though they were from different regions in Africa and spoke different languages. It quickly became a common ingredient in soups consumed by blacks and whites alike. Though it was most popular in the Old South in places such as New Orleans and Charleston, it was certainly not confined to those areas. 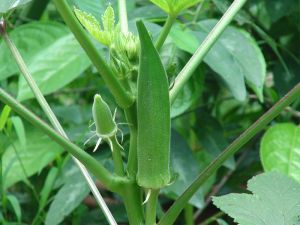 In the 18th century Peter Kalm, a Finnish-Swedish botanist and explorer, was commissioned by the Royal Swedish Academy of Science to collect indigenous seeds and plants for agricultural purposes.  He spoke of okra as a popular plant for soups.  In the 1780s, Thomas Jefferson considered it to be one of Virginia’s most esteemed garden plants.  In fact, okra references can be found in garden records and maps across the early Mid-Atlantic, Chesapeake and Lower South.[4]

Although soups and stews continue to be the main method for consuming okra, another way of cooking the little vegetable became extremely popular and is perhaps more well-known throughout the United States today. The okra is considered too slimy or gooey to be eaten alone, but cover it in some meal and fry it up and it becomes a southern tradition. Interestingly, there is evidence that the ancient Egyptians enjoyed their own version of fried okra. One of the earliest accounts of okra is by a Spanish Moor who visited Egypt in 1216. He described how the plant was cultivated and prepared by the Egyptians, stating that the pods when young and tender were eaten with meal.[5]

Today the okra is used for more than just delicious stews and delectable fried finger food. It is said that in Zimbabwe women are using it to hydrate and repair skin damage. Fresh okra is boiled until soft, left to cool, mashed into a consistency for a masque and applied to the face. After five minutes the masque is rinsed off, leaving the skin feeling cool and refreshed.[6]

So when you buy the ingredients for this flavorful and ancient okra soup, pick up enough okra to make yourself a refreshing face masque.  And give homage to this hardy and versatile vegetable that both nourishes and beautifies. It’s a vegetable for the ages.

*Recipe courtesy of The History Kitchen.

*Note:to make this recipe kosher, use olive oil and vegetable broth. The original recipe calls for 1 tsp of black pepper. We have cut it to 1/2 tsp, but if you can tolerate spicier foods, feel free to add the whole amount (or to taste).