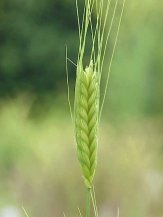 Today we’re bringing you yet another healthy and delicious ancient grain. We’ve already covered quinoa and amaranth, and now it’s time for the lesser known, but no less fantastic, einkorn. “What in the world is einkorn?” you wonder. Well, leave it to AN to bring you the history and a tasty recipe so you can learn to love another recipe with a past.

Einkorn is actually a type of wheat that was one of the first plants to be domesticated and cultivated. The earliest of evidence of its domestication dates all the way back to between 8,650 BCE and 7,950 BCE and was found at two archaeological sites in Turkey.[1] The ancients really knew what they were doing when they began eating and then growing the grain. It has a lower gluten content than modern wheat and is dense with nutrition.

It is a rich source of the beta carotene lutein, a powerful antioxidant. Einkorn has the highest amounts of lutein of any other variety of wheat. Einkorn is also a rich source of tocotrienols and tocopherols, powerful antioxidants and forms of Vitamin E. Compared to modern wheat varieties, einkorn has higher levels of protein, crude fat, phosphorous, and potassium.[2]

If that’s not enough to make you want to try cooking with einkorn, perhaps its famous fan will. Who doesn’t love a celebrity endorsement? This wheat was actually eaten by Ötzi, the Iceman. The exquisite, naturally preserved mummy who lived around 3,300 BCE was found in 1991 on a glacier in the Alps and is remarkable for his tattoos. Researchers have found that Ötzi’s last meal included unleavened bread made of einkorn wheat.[3] So it’s only stands to reason that if einkorn was good enough for Ötzi’s last meal, it’s good enough to try in a 21st century repast. Talk about a timeless recipe….

And if you’re really longing for alternatives to modern wheat, einkorn has two close relatives that you can also try. They are not quite as old as einkorn, but pack the same ancient nutritional punch with less gluten. Farro and emmer are ancient hybrids of wild einkorn and are likewise adaptable to modern recipes.

Now that we’ve peered into the past, it’s time to cook in the present. Enjoy this recipe for Einkorn Flour Pancakes. It is a great way to start your love affair with ancient einkorn flour!

Tip: You may also use rice milk, buttermilk or your yogurt of choice in replace of milk. Another option is to sour your milk for a more complex flavor by adding 1 tbsp. apple cider vinegar or lemon juice to 1 cup of milk and let it stand at room temperature for 15 minutes.