Elizabeth I and the Excitement of Fireworks 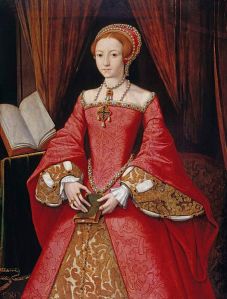 Portrait of Elizabeth I as a Princess, circa 1546.

Fireworks were first introduced in England at the wedding of Henry VII and Elizabeth of York.  The common people weren’t sure what to think of fireworks, with fire lighting up the sky and the incredible noise, but on the whole, they decided that they liked them.  His son, Henry VIII, who is known for his many wives, continued the royal tradition of celebrating with fireworks.  In his writings, the author James Anthony Froude describes the scene at Henry VIII’s wedding to his second wife, Anne Boleyn, as “wild men casting fire and making a hideous noise.”[1]

Anne’s daughter, Elizabeth, was absolutely fascinated by fireworks as a child. Later crowned Elizabeth I of England, she never lost her love for the thrill and spectacle of fireworks.  It wasn’t long before the whole country was obsessed with them.  Of course, it didn’t hurt that Queen Elizabeth I found great excuses to celebrate with fireworks.  She was so impressed by how elaborate the displays were getting, that she decided to create the position of “Fire Master of England.”[2]  She granted this title to the best and most respected fireworks-maker in England.  This only enticed others in England to perfect the art of fireworks so that they, too, could qualify for that title.

During Elizabeth I’s reign and throughout the 16th and 17th centuries, one unique fireworks design reigned as the “crown jewel of fireworks.”  It was a massive dragon with papier-mâché scales.  Built on a huge wooden frame, it was stuffed with firecrackers, spinners and fountains, so that it would literally “breathe fire.”  Sometimes, a second dragon would be constructed so that the fireworks masters could create a breathtaking mock battle.[3]

Fireworks continued to spread rapidly in popularity.  William Shakespeare even mentioned them in his writings.  Later, King James II was so overjoyed by the fireworks display at his coronation, that he officially knighted his Fire Master.[4]

Before taking the throne, Elizabeth was a princess in the royal household.  She was tutored and given every privilege.  Her father, however, who kept wanting a son to succeed him, declared her illegitimate with no right to the throne.  He did the same for Mary, who was Elizabeth’s half-sister. The charges were soon dismissed.  He did have a son by another wife; King Edward IV died at age 15, but not before naming Elizabeth’s cousin, Jane Grey, his successor.

Mary led a coup and dethroned Jane after only nine days.  She took over England’s  throne.  Unfortunately, she also became ill and died shortly afterward, so Elizabeth, who was next in line, took over.  Elizabeth was only 25 years old—young by today’s standards, but in 1558, when most people died early from disease, she was considered mature enough to run the country.  She reigned for 44 years, and saw England through both political and religious turmoil, a war with France and royal family infighting.  Despite the stresses of her position as queen, she always treasured the excitement of fireworks. Elizabeth I died in 1603 at age 69.[5]

4 responses to “Elizabeth I and the Excitement of Fireworks”