The History in our Language: Idioms from Ancient Times, Part 2 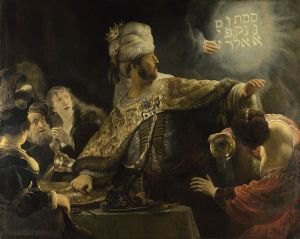 Some of our common English sayings have a very ancient past.  As a follow-up to The History in our Language: Idioms from Ancient Times, Part 1, here is Part 2 of idioms with ancient roots.

THE WRITING IS ON THE WALL

This phrase, meaning that danger is imminent, derives from the Aramaic “Mene, Mene, Tekel, Upharsin.” These words come from the Old Testament story of Belshazzar’s feast and forewarn of the fall of Babylon to Persia.  According to this account, while Belshazzar is drinking and partying in the temple—and desecrating sacred temple wares—a disembodied hand appears and writes “Mene, Mene, Tekel, Upharsin” on the temple wall.  Belshazzar and the Babylonians cannot figure out what the words mean, so he calls for Daniel, a Jewish exile brought from Judah, to interpret. [1]  Daniel explains:

“This is the interpretation of the thing: MENE; God hath numbered thy kingdom, and finished it.  TEKEL; Thou art weighed in the balances, and art found wanting.  PERES; Thy kingdom is divided, and given to the Medes and Persians.” [2]

“The writing is on the wall” is not a translation, but rather a reference to a bad outcome that should have been obvious, and was literally written on the wall.

EVEN A BLIND PIG FINDS AN ACORN SOMETIMES

According to Martha and Grant from Wayword Radio, this saying was a favorite of Bill Clinton’s.  It means that whatever you have just accomplished was pure luck – not skill.  Variations of this phrase date all the way back to ancient Rome, where they would say in Latin “a blind dove sometimes finds a pea.” [3]  So whenever you accomplish something purely by chance, remember that luck figured in the vagaries of life even for the Romans.

This is something you definitely don’t want to do.  When someone is wary that an action will be the equivalent of “opening Pandora’s box,” he or she is referring to the ancient Greek myth in Hesiod’s Works and Days.  Zeus, annoyed with Prometheus for getting fire from Hephaestos and returning it to man, decided to give Prometheus’ brother a “gift” in the form of the first woman. [4]  Pandora was given to the Titan Epimetheus as a bride along with a box (a jar in some versions of the story) warning the couple never to open it.  When each of the gods were contributing gifts to the creation of Pandora, Zeus instructed Hermes to “put in her a shameless mind and a deceitful nature,” [5] so Pandora found it impossible to contain her curiosity. She opened the box, which released all the evils, diseases and troubles known to men.

The moral of the story?  If someone warns you that what you are about to do would be like opening Pandora’s Box, think twice.  You never know what you will find—or what will find you.

A great version of this myth for kids can be found at E2BN’s Myths and Legends page.

If you have other phrases and idioms with ancient origins, please leave them in the Comments box.  We’d also love some suggestions for a Part 3!

1.“The writing is on the wall.” Phrase Finder. http://www.phrases.org.uk/meanings/the-writing-is-on-the-wall.html

3. Martha Barnette and Grant Barett. “Not Those Thongs.” A Way with Words. December 3, 2011. Wayword Radio.  http://www.waywordradio.org/thongs/

2 responses to “The History in our Language: Idioms from Ancient Times, Part 2”