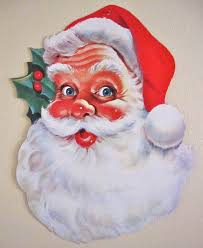 Below are two cookie recipes:  one in honor of St. Nick and the other Santa Claus.  For those of you who have a healthy dose of curiosity as well as a sweet tooth, let’s explore how these two holiday figures came to be.

St. Nicholas was a bishop in southwestern Turkey in the 4th century.  Born to a wealthy family, he gave much of his money away in support of the poor.  As the bishop of Myra, he had a number of miracles attributed to him and was eventually declared a saint.  His feast day was celebrated on December 6th.  During St. Nicholas’ lifetime, Pope Julius I decided that Jesus should be given a day that could be celebrated in honor of his birth.  Because the winter solstice was already being celebrated, the birthday for Jesus was designated to coincide, which eventually proved successful in “Christianizing” the previously pagan holiday.  Over time St. Nicholas’ day and Jesus’ birthday became associated, and the Christmas tradition began.   Because St. Nicholas was beneficent in his offerings to the poor, stuffed stockings and gifts became synonymous with this day.Unfortunately for St. Nicholas, the Protestant Reformation dismissed Catholic ideas about saints, so St. Nicholas celebrations were abandoned over time throughout Europe except for Holland, where he was referred to as “Sinter Klaus,” which later morphed into “Sancte Claus.”  Contrary to popular thinking, the Dutch did not bring Santa Claus to the New World.  Rather, scholarship shows that an interest in Dutch customs grew following the Revolutionary War in the United States.  Washington Irving included Santa Claus in a history of New York, while the poem by Clement Clarke Moore entitled “A Visit From St. Nicholas,” often referred to as “The Night Before Christmas,” became an instant success.  Moore was a professor of biblical languages in New York and added Norse and German legends to the telling.  And with a deft nod to the Saami people of Northern Scandinavia and Finland, he incorporated reindeer in his poem not only as a practical method of transportation (they are snow creatures after all) but as figures that grab the imagination in each retelling of the holiday story.

So enjoy the cookie recipes below as well as the tale of two “Sintas” or “Santas” or whichever moniker you choose.  Happy Holidays! 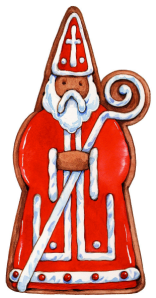 *This recipe is from Aaron Shepard’s The Baker’s Dozen: A Saint Nicholas Tale. You can find the pattern for the cookie here. Just print it, cut out the shape, then use that to make a sturdier pattern from cardboard. Lay the cardboard pattern on your flattened dough and trim around it.

*(Optional) After the cookies have cooled, paint them as Saint Nicholas with red and white icing. 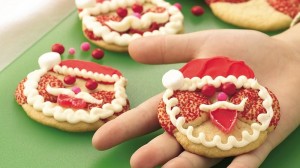 2 responses to “Bon Appetit Wednesday! St. Nicholas or Santa Claus? A Cookie Is Still As Sweet….”