Tattoos and the Body as Canvas 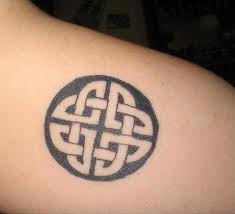 UPDATE!   This post was originally published on March 14, 2013. One year later and ancient tattoos are back in the news due to a fascinating find and an exciting exhibit at the British Museum. Eight mummies from Egypt and Sudan have been subjected to CAT scanning, infra-red “reflectography” and carbon dating in an effort to develop a more complete picture of their ancient lives for the new exhibit called Ancient Lives: New Discoveries. The scanning has revealed previously unseen features from beneath their wrappings. One of the most interesting discoveries is a tattoo on the inner thigh of a 1,300 year old female mummy. The tattoo represents the symbol of the Archangel Michael and spells out in ancient Greek M-I-X-A-H-A (Michael). According to an article by Robert Mendick in The Telegraph, the woman was 20-35 years of age, died in about 700 CE and “lived in a Christian community on the banks of the Nile.”[1]

Daniel Antoine, the museum’s curator of physical anthropology and of the coming exhibition, said, “She is the first evidence of a tattoo from this period. This is a very rare find…The scan of the Sudanese mummy showed her internal organs are remarkably well preserved…We can only speculate why she had a tattoo. Perhaps for protection.”[2]

You can view the mummy in person at the British Museum’s exhibit Ancient Lives: New Discoveries, May 22-November 30, 2014. Read our post below to learn more about the history of tattoos from ancient to modern times.

Today one in five Americans have tattoos. [3] For some, tattoos are extremely personal, displaying portraits of lost family members, symbols of religion and community, or artwork.  Others will often sport designs that they believe lend a certain aura to their personality.  On the other hand, take the case of Carol Lustig. The Celtic knot tattoo on her shoulder would seem to be a reminder of her Celtic heritage. Instead, Lustig states: “I chose the design off the wall. A million people could have that same tattoo.” [4]

While today we may think of tattoos as a very modern part of our cultural expression, you might be surprised to learn that tattoos have a long history around the world.  Much like today, tattoos in antiquity had implicit cultural meaning. They were used medicinally, for protection, as adornment and most often as markers of religious beliefs, antisocial behavior and status. 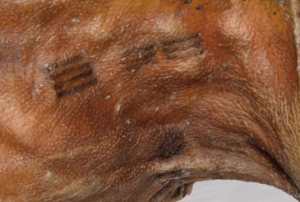 The Iceman has over 50 tattoos.

The earliest known evidence of tattoo practice was discovered  in 1991 on a 5,200 year old “Iceman” found near the Italian-Austrian border.  The ice preserved the man’s skin, allowing modern anthropologists to see dot and cross tattoos on the spine, knees and ankle joints. The current theory is that the 57 tattoos were medicinal– applied on these specific locations to relieve joint pain. It is speculated that the tattoos were a form of acupuncture as they appear to be located on or near known acupuncture points. [5]

Evidence of tattoos in Egyptian times is abundant.  For example, they were present on several female mummies from c. 2000 BCE and were also discovered on several female Egyptian figurines from c. 4000-1200 BCE.  The tattoos on the figurines appeared primarily on the upper thighs, leading some anthropologists to speculate that they were used to mark prostitutes. Other Egyptian mummies have been found with tattoos on their stomachs and thighs. These tattoos, usually in dot net patterns, may have served as protection during pregnancy– keeping the fetus protected in the womb.

During Roman times, tattoos were used almost exclusively as markers. They were “stigmata” that branded slaves, members of religious sects and criminals. Tattoos were largely negative and considered a degradation. In fact, tattoo removal was quite popular at the time. Tattooing of the whole body, which is often done today as ornamentation, was considered barbaric as tattoos were meant to be solely “utilitarian.” Tattoos became popular briefly among Roman soldiers until Emperor Constantine, the first Christian ruler, banned them to respect the Christian belief that disfiguring the body, made in God’s image, was sinful. [6]

The castigation of people wearing tattoos in the Christian-Judeo heritage stems from one of the most egregious crimes in the Bible—fratricide by Cain.  For the murder of his brother Abel, Cain’s face was marked by God, giving rise to the complex emotions associated with tattoos and the prohibitions against markings on the skin.

There are many more examples that prove tattooing has been a widespread practice around the world. Whether one considers them art or simply a marker, they appear on mummified bodies across the globe including pre-Columbian Peru and Chile, Native Americans c. 1375 CE, China and Japan c. 1200 CE, and the Maori culture of New Zealand where the ancient practice still survives. The word “tattoo,” in fact, comes from the Polynesian word “tatatu” or “tattau,” which means hit or strike– most likely referring to how the ink in the Maori practice is literally “tapped” into the skin. [7] 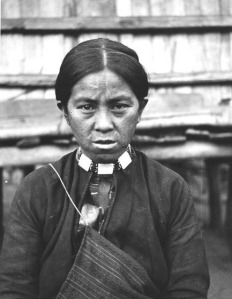 An Atayal tribal lady with tattoo on her face as a symbol of maturity for both male and female.

The Japanese tradition has an interesting history with body art.  The Ainu, an ancient people living in what is today Japan and Russia, probably brought facial tattoos to Japan.  Clay figures excavated from tombs dating from 3000 BCE had facial tattoos and likely represented figures that could accompany the deceased on their journey to the underworld.   During the Kofun period of 300-600 CE, facial tattoos became a form of punishment and indicated the untouchable classes, the hinin and the eta. Today, tattooing in Japan has fallen in disfavor as many of the Yakuza, or Japanese mafia, display them. [8]

While these ancient cultures used various methods to ink tattoos, modern technology has made all the difference for contemporary body art aficionados.  The first man to use the electric tattoo gun successfully was Samuel O’Reilly, who set up shop in Chatham Square, New York in 1891.  He improved the commercially unsuccessful model first developed by Thomas Edison.

While the body as canvas has a long and colorful history, a recent variation has a profoundly intimate purpose.  Eighty-six students at Princeton University are participating in the “What I Be” project.  Students are photographed after writing their inner thoughts on their faces or hands.  Here for all to see are their insecurities, how they want to be remembered, what they want to change.  The medium is a black marker, temporary, able to be washed off, yet leaving an indelible mark on subject and audience as long hidden secrets and fears are revealed.

“The first thing I do is ask them what insecurities they’ve thought about wanting to do their image on, and it kind of goes from there,” said photographer Steve Rosenfield, the mastermind behind “What I Be.” “They go from being nervous to feeling kind of relieved from the pressure of not sharing it with many other people, and afterwards they feel empowered and inspired. They’re finally able to face their insecurity and put it out there.” 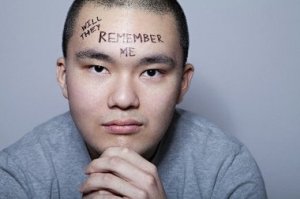 Zhan Okuda-Lim, a Princeton University sophomore, is show in a photo taken by photographer Steve Rosenfield on Feb. 17, 2013, as part of Rosenfield’s project at the university. Image courtesy of nj.com.

Claiming ownership of one’s insecurities and unmasking their pain through body art follows a long history in the cultural applications of tattoos.  But the difference here is that as people confront and overcome their personal obstacles, the “tattoos” evolve, the messages change.  The pain, as well as the tattoo, is evanescent.  It is the human spirit that holds permanence.

Although tattoos are becoming more common among younger generations, the workplace can prove to be a hostile environment.  Many companies still view tattoos as carrying negative connotations that can affect business.  And it’s not just the top-tier companies, but many middle and smaller ones that are also sensitive to tattoos, particularly ones with a graphically loaded message.  With such a competitive job market, applicants are choosing to cover up rather than baring their body art.

According to many monitoring the pulse of our modern culture, the image of tattoos will continue to emerge from their historical and cultural antecedents, and what today may seem controversial may tomorrow be just another fashion accessory.  With that in mind, would you consider getting a tattoo?  One caveat, though.  Remember, someone may be studying it 5,200 years from now.  What is the message that will be your legacy for the ages?

*For more information about the “What I Be” Project visit:

Steve Rosenfield, Ganesh Photography, explains how to contribute to “What I Be” project: http://www.youtube.com/watch?v=NE4yWqTfb5g

For other images in the “What I Be” project, go to

3 responses to “Tattoos and the Body as Canvas”