Easter, Resurrection and Chocolate Bunnies: Social Marketing Through the Ages

Easter is one of the holiest of holidays for Christians.   And with Easter’s roots in antiquity, we can see why the symbolism of this holiday continues to give succor and hope to believers today. But Easter is also a holiday that resonates for secular audiences.  You just have to know your market.

Easter derives its name from Eostre, an Anglo-Saxon goddess of spring. As happened with many pagan holidays, early Christians saw an opportunity.  Around the second century CE they began absorbing Eostre’s meaning into their own story of Christ’s death and resurrection.  It was the holiday that spoke to the core of the human experience:  that death was merely transitory and that life—whether in this world or the next–prevailed.  So the most heralded and cherished concept of the Christian faith became entwined with Eostre, which itself commemorated life triumphing over death.  By correlating the stories over time, the fledgling Christian church not only gained a popular holiday, but also converts.  Forget today’s marketing calibrations for brand loyalty, return on investment and predictive validity.  This early social marketing by enterprising Christians is a case study of excellence in branding.  What better than a holiday celebrating life over death?  What smarter business plan than capitalizing on the success and market share held by your competitor, in this case, Eostre celebrants?

For those faithful there are many ways to celebrate this holy holiday. For the more secular among us, here are some interesting facts from 2013 (for U.S.):[1]

Eye-popping data for this cavity-inducing holiday, isn’t it?  You can’t argue with the numbers that the Easter market has huge appetites (controversy too if you consider the bunny ears v. other body parts as the choice for a first bite).

And while we are equivocating over bunny parts, just where did the Easter Bunny come from? 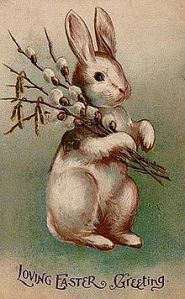 A 1907 postcard featuring the Easter Bunny.

The rabbit has a long mythology across cultures.  We’re familiar with its reputation for prolific reproduction.  This is an apt trait for a holiday about rebirth and fertility. Among German Lutherans hundreds of years ago the Easter Hare was an arbiter of proper behavior, much like Santa Claus. Children who were obedient received eggs, candy and sometimes toys from the basket that the Easter Hare carried.  German immigrants to the United States brought their Easter traditions.  Cakes and breads were often made in the shape of a hare, and it is speculated that this could have been when chocolate rabbits were first created. Over time the hare became a rabbit, which morphed into a bunny, and any judgment on a child’s behavior disappeared.  All good news for children, candy companies and dentists.

Easter may be the most celebrated holiday, sartorially speaking.  Easter finery has been on parade for centuries, at first to connote a new life in Christ, and in more modern times to see a peacock display of dress and outrageous millinery creations.

In its early dawning the Christian Church used clothing and pageantry as a way of demonstrating a new life in Christ.   Constantine I in the 4th century ordered his people to dress in their finest garments to honor Christ’s death and resurrection.[2] Later, recently baptized Christians wore white robes during Easter week and already baptized Christians wore new clothes to share the symbolism of a resurrected life.  In the early Middle Ages people gathered before and after Easter services for a parade, a collection of the faithful that also was designed to impress nonbelievers and hopefully attract them to the church. Churchgoers in Medieval Europe would followed a crucifix through town, with the Stations of the Cross created to use as a worship technique for the largely illiterate masses to learn about the faith. Perhaps the most famous parade tradition started in New York City in the 1880s with a spontaneous walk down Fifth Avenue, a parade that still continues today.  Here, one surrenders any religious symbolism and instead celebrates a whimsical and extravagant costuming heralding the arrival of spring. See some examples here.

The Rose Trellis Faberge Egg presented by Tsar Nicholas II to his wife, the Empress Alexandra Fyodorovna, on Easter (April 22) 1907.

Eggs are again a sign of fertility with ancient symbolic sources in Egyptian, Persia and Rome. In Medieval Europe eggs were forbidden during Lent so they had to be preserved through boiling or other means.  Soon they became associated with Easter meals and gifts.  Egg dyeing has been practiced across cultures.  The Eastern Europe practice of making elaborate designs on eggs is an art in itself.  Perhaps the most famous of decorated eggs were the Imperial Eggs created by the jewelry firm of Peter Carl Faberge for czars Alexander III and Nicholas II in the late 19th and early 20th centuries. Jewel-encrusted, each with a surprise such as a watch or picture frame, these creations are unrivaled in their beauty and extravagance. See the names and pictures of the Imperial Eggs remaining today.  In April 2014 a previously unaccounted for Faberge egg was discovered.  Read more here about this astounding find.

Read more of the history on our blog on egg decorating.

Social Marketing:  Learning From the Ancients

Again we see how Easter has transmuted from an early commemoration of rebirth into a pageantry of religion and secular pursuit.  Last year in the United States $14.6 billion was spent annually on all Easter-related goods.[3] Much as many decry the secularization of religion, regardless of type, there are those who see merit in attracting more people to the fold, even if it means blending the religious with the more worldly. The early church did a masterful job of using language, symbols, clothing and ritual to attract the masses. How many of us today who so assiduously follow Google metrics, socially engage with Facebook, Twitter and Pinterest, and gauge every hiccup in today’s cyber-driven world will have that traction in another 2,000 years?  Break off those chocolate bunny ears and ponder that.

See some fascinating and unique ways that people celebrate Easter around the world: http://www.buzzfeed.com/jessicalima/unique-easter-traditions-from-around-the-world

One response to “Easter, Resurrection and Chocolate Bunnies: Social Marketing Through the Ages”