Bon Appetit Wednesday! Why Do We Eat Turkey on Thanksgiving?

Why don’t we eat hot dogs on Thanksgiving? Or a seafood feast? Whether it’s roasted, smoked or fried, with cranberry sauce or smothered in gravy, turkey is synonymous with Thanksgiving in the United States and has even infiltrated various other Thanksgiving feasts around the world. Today, we’re bringing you some fun facts about why turkey is the main food for this holiday and sharing a recipe for Turkey Sobaheg, a turkey stew that has been cooked by the Wampanoag Native American tribe for centuries.

So now you know a little more about the fowl in your feast. Use this recipe for Turkey Sobaheg to make sure all of that leftover turkey can be enjoyed for days after the holiday has ended.

For more interesting information about Thanksgiving check out the following articles:

And for the kids in the family, check out all of the fun Thanksgiving activities at Enchanted Learning. 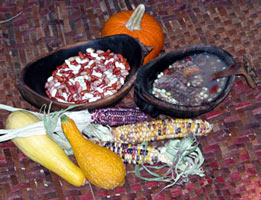 3 responses to “Bon Appetit Wednesday! Why Do We Eat Turkey on Thanksgiving?”