To Repatriate or Not to Repatriate, That is the Question….James Cuno’s Case Against Repatriating Museum Artifacts 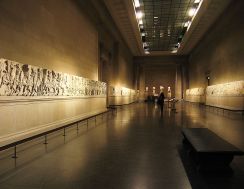 The Elgin Marbles, one of the most famous cases in the debate over repatriation, are seen here in the British Museum.

The topic of repatriation of cultural artifacts is hotly contested, with intense opinions and emotions on both sides of the argument. Repatriation of cultural artifacts is a process by which an item is returned to its country of origin. Whether or not an item should be returned to its country of origin may seem like an easy question to answer. Of course a nation’s cultural history should rest with the nation itself. However, the issue is not so simple. Most people agree that when repatriation is requested because an item has been looted and illegally removed from its origin, it should be returned, but when the repatriation request is based solely upon a nation’s claim to their cultural heritage, the issue becomes extremely complicated. There are questions about a nation’s ability to safeguard the item, questions surrounding regions at war and embroiled in violent conflict, issues with humanity’s right to its shared cultural heritage and problems that arise when multiple nations claim a right to the artifact because the original home of the artifact no longer exists. In fact, the topic is so nuanced and is impacted by so many different forces, it is sometimes difficult to figure out which side you’re on.

One of the foremost experts on repatriation and a frequent speaker and writer on the topic is James Cuno, president and CEO of the J. Paul Getty Trust. He believes that items acquired illegally, when discovered, should certainly be repatriated; however, when acquired through legal means, an artifact held in an “encyclopedic museum” should not be torn from its place and sent back to its country of origin. He points out that “when art and culture are strictly attached to a nation, we lose the cross-culture ties that bind many different peoples together.”[1]

Recently, Cuno wrote an article entitled “The Case Against Repatriating Museum Artifacts.” It outlines in clear terms his argument against the repatriation of legally acquired artifacts from museums.

In the battle over cultural heritage, repatriation claims based strictly on national origin are more than just denials of cultural exchange: they are also arguments against the promise of encyclopedic museums — a category that includes the Metropolitan Museum of Art, in New York; the British Museum, in London; and the Louvre, in Paris. By presenting the artifacts of one time and one culture next to those of other times and cultures, encyclopedic museums encourage curiosity about the world and its many peoples. They also promote a cosmopolitan worldview, as opposed to a nationalist concept of cultural identity.[2]

Regardless of your stance on the repatriation issue, it is important to consider all sides of the argument. Cuno’s impassioned words are met head-on by his opponents who claim that museums’ continued collection of ancient artifacts only encourages looting and prevents items from being studied and appreciated in their original context.

The debate is fascinating and important. Take a moment to read Cuno’s article here and then read a For/Against debate published here in 2010, in which Cuno’s point of view is counterpointed by Malcom Bell III who argues for repatriation.

Perhaps the bottom line is that these items need to be protected and studied. There must be cooperation among the nations of the world and an understanding that while ancient artifacts can be tremendously valuable as instruments of national identity, they are also pieces of a larger whole. They are sentences and chapters in the greater story of the human race. Our survival and ability to thrive as a species may very well depend on us finding the common bonds between us rather than continuing to draw ever more dividing lines.