In Part 1 of our ancient hygiene post we discussed the psychology behind our need for hygiene, our long history of soap-making and even ancient cosmetics. Now, continue on this journey with us to discover more ancient efforts to fight the “yuck.”

If you can’t beat it, mask it

After soap was discovered, body odor still posed a major problem for ancient man. Laundry and cleaning, not bathing and hygiene, dominated most soap use in the ancient world. Those who did use soap for bathing didn’t do so on a daily basis. Since they couldn’t completely remove their body odor, masking it seemed like a great idea.

In the 4th millennium BCE, Sumerians forged more than the first written languages. Researchers found text depicting a recipe that seems to be a concoction for masking body odor. Ancient Egyptians also deemed skin scenting a priority. They used cinnamon and citrus mixed with a cone of fat to make a sweet smelling unguent that melted slowly in heat, releasing pleasing aromas in the process.[1]

From 1550 -1200 BCE, the Mycenaean Greeks peddled perfumes not unlike what we buy at Sephora today. They used crude oils, spices and herbs to brew perfumes packaged in dainty vials. Like modern vendors, they realized how much money they could make from vending these sweet smelling, seductive little packages.[2]

It turns out your signature scent might not be the modern contrivance you thought. All things considered, it’s not very different from the first perfumes concocted thousands of years ago.

So much for masking it. Ancient Greeks and Romans put bathing at the center of their culture and even their political structure. And you thought you loved a good bath. Their pioneering efforts lead to many of our modern hygiene practices. The word hygiene itself comes from the Greek “hygeia,” which meant “soundness” or “wholeness.”[3] Its importance is personified in Hygeia, the Greek goddess of health.

Greeks and Romans typically initiated their cleanliness rituals by scraping the skin with a tool called a strigil. This would remove the surface dirt from their bodies, and the subsequent dips in the baths would wash off the residue.[4]

For the Greeks, bath time was more than just a way to get clean. They believed baths bestowed healing properties, especially the steamy ones. Hippocrates himself trumpeted the healing properties of thermal water, a concept the Greeks called balneotherapy.  They placed their baths near volcanoes or hot springs to ensure constant access to naturally thermal water. To simply get clean, the Greeks sunk into hip-baths, which submerged bathers only to the hips. They also frequently used sponges and water pitchers to splash themselves clean. 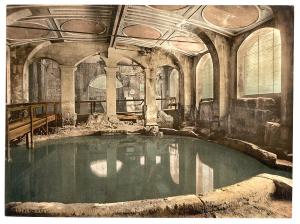 The Romans took bathing to the next level, building remarkable structures to enable their hygiene and bathing practices. Their famous aqueducts pumped 222 million gallons of water into the city a day.[5] Just like the Greeks, the Romans saw bathing as much more than a way to get clean. Their bathhouses offered areas for reading and relaxation as well as physical exercise. And you would want to spend some time in these bathhouses. Many of them were grand to behold with columns, terracotta bricks and mosaic-tile floors.[6]

Even the smallest Roman towns boasted a bathhouse. Going to war? No worries! The Romans constructed pop-up baths so their fighting soldiers could stay clean.

Today, most of us only have to take a few steps to hop into our own personal private tubs. In Greco-Roman times, only the wealthiest citizens would flaunt personal bathrooms in their villas. As different as their bathing habits were from ours today, we owe them for having bathtubs and showers as compulsory structures in modern homes.

Painting of Louis Pasteur studying germs in his laboratory, 1885. A. Edelfeldt.

By the 18th century, the budding middle class considered cleanliness imperative to societal functioning. Although full baths were not a daily occurrence, washing was encouraged along with brushing one’s teeth and the grooming of hair and nails. Secure in its position as a societal necessity, hygiene was eventually transformed by a new scientific discovery into a necessity for health and wellness as well.

From 1850-1920, the scientific community buzzed about germ theory. The theory stated that microscopic organisms (nicknamed germs) enter your body unseen to cause disease.[7] On an even more chilling note, the theory stated that these “germs” could spread through contact with other people. Proper hygiene proved an enemy to these new germs. For example, Joseph Lister’s studies directly attributed postoperative deaths in hospitals to poor cleanliness.[8]  Suddenly, doctors saw sanitation as key to stopping contagion and the importance of cleanliness was elevated in the public eye.

How important is hygiene? Today, an estimated 2.4 million deaths globally could be avoided with clean water, sanitation and proper hygiene.[9]

The United States became a hub for soap marketing in the 1800s. The Civil War transformed soap from a make-at-home product into a manufactured commodity. With men off at war, women found themselves with more household responsibilities and far less time for chores like soap-making. Luckily, manufactured alternatives filled their needs. Furthermore, soldiers endowed with manufactured soap during the war came home with a taste for finer soaps.[10] Just like that, manufactured soap went from luxury good to hot commodity.

Soap companies strove to water the germinating seeds of the consumer soap industry. They began crafting individual, artistically branded packages and stopped selling generic bulk to general stores. By the 1870s, newspapers, posters and flyers became flooded with soap advertisements. Some of the first soap advertisers, like P&G, Lever Brothers and Ivory, maintain a roaring business to this day.

Manufacturers even pioneered the modern practice of leveraging popular culture to sell products. In the 1890s the Lever Brothers offered prizes, including cloth-bound copies of Jane Austen’s Sense and Sensibility and Pride and Prejudice, to customers who sent in the most wrappers of Sunlight soap. They awarded over a million books in the seven years that the campaign stretched.[11]  In the 1930s, the soap purveyors not only perfected their marketing to housewives but also became cultural influencers:  Starting in the 1930s they sponsored the long-form, narrative-driven radio and television programs that came to be known as “soap operas.”[12]

Today, you’d be hard pressed to find a friendly face with a go-to recipe for homemade soap. Manufactured bar soap seems as natural to us as oxygen. We have war, and advertising, to thank for that.

The next time you wander into the Health & Beauty aisle at Target, take a look around. Those refined pumice stones and bathing sponges hang there because our Bronze Age ancestors once dared to be inventive with natural resources. And thank your lucky stars for the hundreds of packaged razors available; you might have been forced to use volcanic glass if you’d been born in another time. Think of the years of history that went into making your perfectly perfumed bar of soap, your deodorant that actually keeps odors off and even your squeaky clean bath tub.

If that doesn’t impress you, think of how grateful ancient man would be for that little stick of deodorant. It definitely beats a hunk of scented fat.

[7] Reynolds. “Discovery of Germs”, University of Arizona. Retrieved from http://learnaboutgerms.arizona.edu/discovery_of_germs.htm.

2 responses to “The Ancient Roots of Modern Hygiene Part 2”