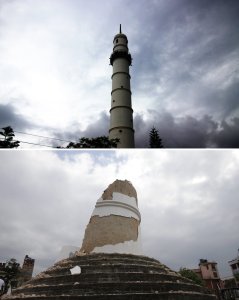 The massive earthquake in Nepal has resulted in thousands of deaths and casualties. Pictures reveal vast swathes of devastation, and as with most catastrophes, it’s hard to distinguish amidst the rubble the evidence of previous human habitation. The earthquake now is embedded as a fault line of the nation’s 21st century self: the time before the earthquake, the time after. Once again, this ancient land has raised itself upward and wrenched itself away from earth’s pull. Eventually, after the geological frenzy, it will settle back down again. In Nepal’s strata, in its layers of broken tiles and artifacts, history reveals itself as relentlessly repeating.

The loss of life and cultural heritage defies belief and stretches the imagination in grasping a nation’s grief and a people’s loss of identify.  It was a natural calamity visited upon millions. But one can argue that it becomes very personal when so much of who you are lies in ruins.

Despite its vulnerability to nature’s fury, Nepal has a bounty of ancient sites and religious shrines that are holy to those of Buddhist and Hindu faiths. Over the centuries Nepal became an important and unique spiritual and cultural nexus of these two dominant world religions:

As Buddhism and Hinduism developed and changed over the centuries throughout Asia, both religions prospered in Nepal and produced a powerful artistic and architectural fusion beginning at least from the 5th century AD, but truly coming into its own in the three hundred year period between 1500 and 1800 AD. These monuments were defined by the outstanding cultural traditions of the Newars, manifested in their unique urban settlements, buildings and structures with intricate ornamentation displaying outstanding craftsmanship in brick, stone, timber and bronze that are some of the most highly developed in the world.[1]

As with so many tragedies, the first and most important efforts should be directed to saving lives. Once these operations wind down, other profoundly felt issues will undoubtedly emerge. We as a global people—as diverse as we are—share a sense of home and belonging. When the rubble is cleared and the “new normal” begins, what will home look like to the Nepalese? Where will the heart and soul of these people reside? 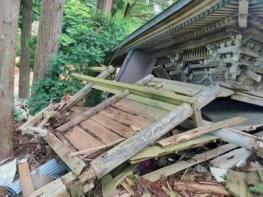 The Kannon-do of the Tenyu-ji Temple in Ogatsu, built in the 14th century CE, collapsed during the Great East Japan Earthquake. Image credit: World Monuments Fund

Wars, looting, natural disasters. The world’s cultural heritage is always under attack. Some have suggested that UNESCO, which documents ancient sites of import, should have an emergency response team to go in and protect historical sites during crises. Others have opined that a trained citizen response might be feasible. In its response to the earthquake and tsunami in March 2011, Japan is a case study of how one nation dealt with the salvage of its heritage:

Less than two days after the Great East Japan Earthquake, a group of Japanese archaeologists, historians, and specialists in cultural informatics started discussing on Twitter and Facebook  what they could do to assist. This spontaneous activity resulted in the formation of a Consortium for Earthquake-Damaged Cultural Heritage (CEDACH), formally established at an inaugural meeting on 21 March 2011. In April 2011, as the Cultural Property Rescue Project started conserving the damaged materials stored in the museums hit by the tsunami, some local authorities began to assess the feasibility of relocating the most severely damaged coastal settlements to higher ground, where a dense distribution of archaeological sites was predicted …. Fully aware of this situation, CEDACH offered a range of expert support for the documentation and restoration of the endangered cultural heritage, particularly buried cultural properties such as archaeological sites and materials, through the formation of: (1) a social network of experts; (2) a geospatial information infrastructure; and (3) a theoretical framework of ‘disaster heritage studies’.[2]

Restoring a body, a mind, a soul, a sense of self—we are as humans the sum of our sentient and physical parts. When tragedy strikes, life splinters. What we seek is to feel the embrace of belonging, of being rooted once again.  That is why for individuals dedicated to preserving cultural heritage, saving what could be otherwise lost is really all about paving the way home.

We offer our heartfelt wishes to the recovery of the Nepalese people and the restoration of their remarkable cultural legacy.

See more links on the Nepal disaster and efforts to save global heritage during times of crisis:

The 7 Monuments of the Katmandu Valley and their importance:

CEDACH and the 2011 Japanese earthquake and tsunami:

One response to “The Nepal Earthquake: Cultural Heritage and the Soul of a People”