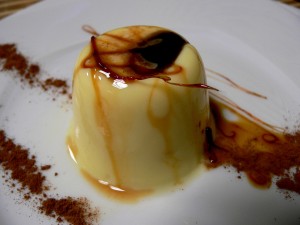 Have you ever slid your spoon into a smooth, creamy serving of flan and wondered, “What genius came up with this heavenly creation?” Well, we can’t give you a name, but we can give you the ancient history behind the delectable concoction we call flan.

As with so many of our modern recipes, flan has its origins in Rome. Those crafty Romans developed flan originally as a savory dish, but quickly decided to expand its use. And while they did create a sweet honey-flavored flan, they also indulged in the less appetizing eel flan with pepper.[1]

Of course, the Romans carried their version of flan with them throughout the world and shared it with various cultures. Eventually, each culture made flan their own. Two places in particular embraced flan and adapted it to fit their taste.

The Spanish version of flan is the most well-known today. It became a dessert characterized by caramelized sugar. It is important to note that Spanish flan was also infused with an Arabian influence during the 11th-15th centuries. This influence included the use of almonds, honey and orange.[2]

Less well-known is the English version of flan. In medieval times, the English added a pastry crust and more eggs to the recipe.[3] They often included nuts and fruits as well.[4] Today, the English are known for their use of all sorts of puddings, including savory and sweet, and flan tops the list for its taste and versatility.

While you may have enjoyed Spanish flan at some point, it is less likely that you’ve tasted a British flan recipe. Today we’re sharing a unique recipe for Egg, Bacon and Asparagus Flan. If you’re craving a traditional Spanish flan, don’t worry. Click here for the “Best Flan Recipe Ever.”

Not an image of the actual recipe, but representative of the finished product.