Zombie Apocalypse, Part 3: Emergency Preparedness and the End of Life As We Know It (We’re Not Kidding)

In Zombie Apocalypse Part 1:  The Lamentable History of Zombies and Zombie Apocalypse, Part 2: Zombies and Pop Culture, we looked at how zombies became the current phenomenon of choice. We also examined the allure of spine-tingling fear and the chemistry of why we love to be frightened.  After all, it’s a suspension of reality. It’s just great fun.

Or so you thought. END_OF_DOCUMENT_TOKEN_TO_BE_REPLACED

In Zombie Apocalypse, Part 1: The Lamentable History of Zombies we examined the backstory of zombies and how Haitian voodoo and African mythology contributed to their embedding in religious and cultural beliefs. Today we are exploring how the zombie became a pop culture phenomenon. END_OF_DOCUMENT_TOKEN_TO_BE_REPLACED 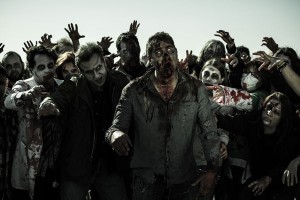 What is it about zombies that is so fascinating? The Walking Dead, a TV program now in its sixth season and the “world’s #1 show”[1], delivers a dystopic picture of a society beset by a virus that turns people into zombies. Its spinoff, Fear the Walking Dead, was a ratings winner upon its debut in summer 2015. Putting a new spin on an age-old plague story, these two shows build upon the premise that everyone somehow became infected, and that the virus lies dormant until death, when the corpse is reanimated unless a catastrophic brain injury is sustained. Drawing from this concept, the writers have crafted some intriguing twists and turns. Both shows have strong storylines and character development. Fans are rabid about the plot unfoldings, even when they diverge from the original comic books. Marketers have had a great run with all things zombie and rumor is some people are even reading again. So maybe it’s a lot of comic books but a range of zombie tomes has also joined the enviable list of beloved vampire and werewolf tales. END_OF_DOCUMENT_TOKEN_TO_BE_REPLACED