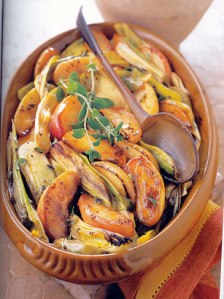 This modern dish is a delightful savory and sweet combination that uses two popular ingredients: leeks and apples. It can be served as a side dish to any entrée.

The leek and apple have nourished people for thousands of years. Both have been cultivated across the world and enriched our mythology and literature with symbolism.

The leek is considered native to Asia Minor or the Mediterranean. It has been used in cooking for more than 3,000 years. Here are some interesting facts:

The apple tree was providing fruit thousands of years ago in the Tien Shan Mountains of Kazakhstan. Remnants of apples have been found in Stone Age dwellings in what is now Switzerland[4] and were cultivated by the Greeks as far back as 300 BCE. Apples have been heralded throughout history, including in the story of Adam and Eve, as symbols of love and beauty to the Greeks and Romans, and in the story of William Tell, the Swiss hero who with an arrow split an apple perched on his son’s head, thus saving both their lives after their Austrian overseer punished them for disobedience. Some other facts about apples:

So savor the interplay of flavors in this Roasted Leeks and Apples dish and consider the history at your table this season.