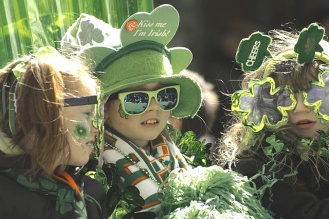 So it’s the wearin’ of the green time again.  In the United States (which in the 18th century took a religious holiday and turned it into a green phenomenon) it’s when everyone claims Irish ancestry for the day.  Just look around and see all things Irish today: green bagels, green beer, green cupcakes and even a green Chicago River.

We thought we’d tell you the story of the true St. Patrick.  There are some surprises here.  As well, we’ll look at one of Ireland’s enduring symbols—the leprechaun.  In a world reeling from a massive financial downturn these last few years, wouldn’t coming across a leprechaun be just the thing to set you right again?  Well, in honor of St. Pat, let us take a look at the leprechaun…and hear a cautionary tale of puckishness, greed and trickery.

The man who became later known as St. Patrick was actually born in Britain around 390 CE to a wealthy Christian family who owned property and slaves. As a young boy Patrick was not religious. That was to change dramatically. When he was 16 Patrick was kidnapped and sent to Ireland as a slave to tend sheep, a grueling and lonely occupation in the rugged terrain, particularly for a young boy.  For seven years he toiled until, according to legend, a voice came to him in a dream exhorting him to escape. It was this experience that converted him into a believer in the Christian faith.  He fled and was able to board a pirate ship that took him home to Britain.  But Patrick’s adventures were just beginning.  The voice returned and told him to go back to Ireland and convert the inhabitants to Christianity.  Heeding the call, Patrick was ordained by a bishop and made the journey back to Ireland.  Unfortunately, the mission was fraught with abuse from the Irish and British elite and by the locals. When Patrick died on March 17, 461 CE, his name was nearly lost to history.  But as time waned and human imagination took hold, the mythology surrounding Patrick grew and centuries later he was made the national saint of Ireland.[1]

Today’s large-scale celebration of St. Patrick’s Day originated in 18th century America. Waves of Irish immigrants flooded the country, especially in the Northeast.  To recognize their contributions to American life and as well to honor their national saint day, the Irish organized local banquets, then parades, on St. Patrick’s Day.  The largest and oldest parade is in New York City, which began the tradition on March 17, 1762.[2]  Arising out of the unique experience of Irish Americans, and embraced by America’s melting pot, St. Patrick’s Day morphed into a largely secular festivity.

A modern stereotypical depiction of a leprechaun.

Now to the leprechaun. According to A Treasury of Irish Folklore [3], Ireland’s rich oral tradition in fairy storytelling departs from other cultures because “the fairy powers in Ireland have been endowed with names and personalities – they are not a nameless commonality.”[4]  W.B. Yeats in Irish Fairy and Folk Tales lists three fairy varieties: the lepracaun, cluricaun and far darrig.[5]  The latter two aren’t referred to in contemporary times, but the leprechaun remains.  A leprechaun is a short, prickly, solitary, often nasty, being—far from benevolent and quite mercurial—who hoards his gold in a pot at the end of a rainbow or hides his treasure in forests or mountains. Some researchers say the name comes from the Irish leath bhrogan, or shoemaker, which is the occupation ascribed to the sprite.[6]  This is why a leprechaun’s presence is marked by a slight hammering sound.

An engraving of a leprechaun counting his gold, 1900.

What makes the leprechaun so fascinating (and gives rise to its mythic transmutations in everything from the maniacal killer in the six-movie series Leprechaun to the impish character on the Lucky Charms cereal box)? William Allingham’s poem “The Lepracaun” says “Get him in sight, hold him tight, and you’re a made man.”[7]  The legend states that the leprechaun will give up his pot of gold if captured or overpowered.  But the leprechaun is wily, and the human’s attempt at stealing the gold is often foiled by the fairy trickster.  In “The Lepracaun” the hapless human falls for an old trick:

The rogue was mine, beyond a doubt.
I stared at him, he stared at me; …

And pull’d a snuff-box out.
He took a long pinch, look’d better pleased,
The queer little Lepracaun;
Offer’d the box with a whimsical grace, –
Pouf! He flung the dust in my face,
And while I sneezed,
Was gone![8]

Maybe the leprechaun did the guy a favor.  According to a study in Psychological Science, more money equals less empathy in people. Co-author Michael Kraus told Time magazine “A lot of what we see is a baseline orientation for the lower class to be more empathetic and the upper class to be less [so].”[9]  As for what that gold can buy, listen to what the research team led by Baylor University psychologist Jo-Ann Tsang has to say. “As in past research, we found that materialism was negatively associated with well-being.”  The “one reason for this negative relationship may be that high materialists find it harder to be grateful, and lower levels of trait gratitude may be related to unmet psychological needs.”[10]

Maybe the leprechaun can be seen as a darker mirror image of human foibles and self-deception.  That the pot of gold lying over the rainbow is a sobering reminder of fortune’s perilous lure. But hey, it’s St. Patrick’s Day.  Let’s just celebrate the green we all love to wear, eat and drink.  March on!

One response to “St. Patrick’s Day, Leprechauns and Human Folly”