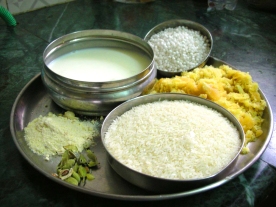 This week we’re bringing you a sweet, exotic treat from India. Kheer is a rice pudding made in several variations across South Asia and of course, it has a history! Also called payasam, this ancient dessert comes from the Hindi culture and is most often seen at ceremonies, feasts and celebrations, although it can easily be enjoyed any time of year.

Kheer is believed to have originated in the Lord Jagannath Temple, Puri, Orissa around 2,000 years ago where it was served as an offering to the gods. This practice spread throughout South Asia to various Hindi temples where the recipe was altered slightly based on the region. Today, there are distinct differences between the kheer produced in Eastern vs. Southern vs. Northern India.[1]

In Southern India, kheer is most often referred to by its Hindi name, payasam, and it is served as part of a tradition based on an ancient legend. The legend comes from the temple of Ambalappuzha and says that Lord Krishna disguised himself in the form of an old sage and challenged the local king to a game of chess. The king was a very good chess player and quickly accepted the sage’s offer. When he asked the sage what he wanted as a reward should he win the game, the sage simply asked for an amount of rice grains for each square of the chess board. He specified that each pile of rice would have double the number of grains of the previous pile. So the first square would have only one grain of rice, the second would have two grains, the third would have four grains, the fourth would have eight rice grains and so on, each pile growing at a geometrical progression from the past pile of rice grains.[2] The king was astounded that the sage wanted such an insignificant reward when his kingdom was full of riches. The king lost the game and began placing piles of rice on squares. He quickly realized his miscalculation and by the 40th square all of the rice in the kingdom was gone. As he finished his calculations he found that he owed the sage 18,447,744 trillion tons of rice, which he obviously did not possess.[3] The sage revealed his true form as Lord Krishna and explained to the king that he did not have to pay back the rice immediately. Instead, he was to serve payasam freely to any who came into the temple of Ambalappuzha seeking food, shelter or simply peace.[4] The tradition continues to this day and any pilgrim entering the temple can request a free bowl of this sweet and ancient dessert.

The recipe we’re bringing you today is based on the kheer that is served in Banke Bihari temple in Vrindavan, India, but there are many other variations you can try. Visit some of the links below to broaden your appreciation of kheer, all courtesy of Veg Recipes of India.