The Knossos Dolphin: Create Your Own Piece of Art Inspired by Antiquity with Dan Fenelon

In honor of AntiquityNOW Month, our Artist-in-Residence Dan Fenelon has created a paint by number activity using one of his paintings inspired by the Minoan “Fresco of the Dolphins” on the island of Knossos. The fresco is from the Palace of Knossos located just south of modern-day Heraklion near the north coast of Crete. The palace was built by the Minoans around 1950 BCE, but was damaged by an earthquake in 1700 BCE and had to be rebuilt.[1] Commissioned by King Minos, the palace was the creation of the ancient architect Dedalos and was said to have been so complex in its design that no one placed inside its walls could ever find its exit.[2] The second palace built on the remains of the first continued this labyrinthine structure, but included several changes. In his book “Architecture of Minoan Crete”, John McEnroe writes,

In the second Palace, much of the monumental bulk of the earlier building would be lightened through structural innovations and intricate details, and the taste for colored stone would be partly replaced by representational wall paintings.[3]

The “Fresco of the Dolphins” is one such wall painting. Were it not for the earthquake and subsequent rebuilding, perhaps this beautiful example of Minoan painting would never have been created. The fresco has been restored and can be found in the residential quarters in what is believed to be a bedroom. 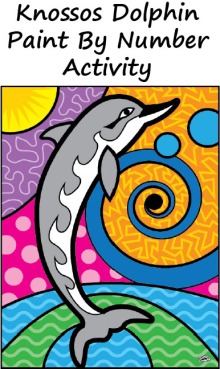 Dan was inspired by this ancient art to paint his own “Knossos Dolphin.” He has put together an activity to create your own versions of this ancient inspired art. Click on the image to the right to download a pdf book that includes stunning images of the fresco as well as instructions and printable pages to complete the paint by number activity.

We would love to see how your paintings turn out. Send us pictures of your “Knossos Dolphin” and we’ll post them on our website!

2 responses to “The Knossos Dolphin: Create Your Own Piece of Art Inspired by Antiquity with Dan Fenelon”