The Summer Solstice: From Ancient Celebration to a Modern Day at the Beach

Saturday, June 21st, marks the summer solstice in the northern hemisphere and that means the first day of summer! For many, it’s time for barbecues, pool parties, camping trips and vacations at the beach, but for some, the solstice is a much more spiritual day steeped in ancient traditions. How did our ancestors celebrate this first day of the warm season?

Also known as Midsummer, the June solstice is the longest day of the year in the northern hemisphere. It takes place when the tilt of the Earth’s semi-axis is most inclined toward the sun. For ancient civilizations this day had extreme significance. It was a day critical to an agrarian calendar where crops and seasonal cycles had to be managed, and a day that was held as a spiritual celebration of light over dark, and therefore, life over death.

The summer solstice was especially important in Ancient Egypt because it heralded the coming of Sirius, the brightest star in the night sky. Shortly after Sirius arrived each year, the Nile would overflow its banks and the flood season would begin, which the Egyptians relied on to nourish the land. They believed that Sirius was responsible for the flooding and set their calendar based on the star’s arrival in the night sky. As soon as the priests saw Sirius they declared that the New Year had begun.[1]

In ancient China, the summer solstice was celebrated with a festival that honored the Earth, femininity and yin. This festival corresponded to the one held on the winter solstice that celebrated the yang.[2] The concept of yin-yang, still foundational to modern Chinese thought, derives from the belief that opposition forces (e.g., hot/cold, light/dark) are actually complementary and interconnected in all aspects of life. Interestingly, it is the yang that was believed to reach the height of its influence on the summer solstice and so the festival actually celebrated the coming influence of the yin, which would gain power and influence until it reached its height on the winter solstice. Honoring the balance between these two forces was and continues to be extremely important in the Chinese culture because if they are out of sync and an imbalance occurs, it will bring catastrophes such as “floods, droughts and plagues.”[3]

The summer solstice was not a time for celebration in ancient Mesopotamia, but one of mourning. In Babylon the solstice meant intense heat, disease and famine. They saw it as a “dead season” and so they associated it with the rising power of the god Nergal, god of war and pestilence.[4] They held a six day funeral for Tammuz, the god of food and vegetation because it was assumed he must die each year at this time.[5]

The belief in Tammuz and the ritual mourning period took place throughout Mesopotamia up until the biblical time of Ezekiel, and today the fourth month of the Hebrew calendar is the month of Tammuz. 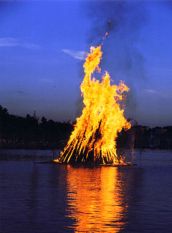 A Midsummer bonfire in Finland.

The ancient Slavic, Celtic, Germanic peoples as well as the Vikings celebrated the Midsummer festival during the summer solstice. There was feasting and great bonfires. The Vikings conducted much of their trade and legal transactions around the solstice because it was believed to be a time of great power.[6] In ancient Gaul the celebration was called the Feast of Epona and honored a mare goddess of fertility who protected horses.[7]

The summer solstice occurred exactly one month before the opening of the original Olympic Games. In addition, many festivals took place on and around the day of the solstice including Prometheia, which celebrated the Titan Prometheus, and Kronia, honoring the agricultural god Cronus. Although the Greek calendar varied depending on the region and time period, for many versions the summer solstice was also the first day of the New Year.[10]

The Temple of Vesta.

For Romans, the summer solstice was all about honoring the goddess Vesta, the goddess of the hearth, sacred to women and protector of marriage and virginity. In the weeks leading up to the solstice, the festival of Vestalia was celebrated and the Vestal temple was opened for all women to visit and make sacrifices. The Vestal Virgins would bake a sacred cake as an offering to Vesta using consecrated water carried from a holy spring.[11]

NumerousNative American tribes celebrated the June solstice with great feasts and dances to honor the sun. One of the most well-documented and elaborate is that of the Sioux, a celebration that continues to this day. It is called the Wi wanyang wacipi, which translates to “sun gazing dance” and centers around a sacred cottonwood tree erected in the middle of a ritual circle.[12] The tree is “a visible connection between the heavens and Earth.”[13] Teepees would encircle the tree to represent the cosmos.  Participants fasted during the dance, their bodies decorated in the symbolic colors of red (sunset), blue (sky), yellow (lightning), white (light), and black (night).”[14]

A TIME FOR CELEBRATION 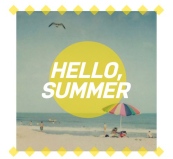 Regardless of your heritage or where you are when the summer solstice arrives this year, there are plenty of ways to mark the day. Join in a local celebration or invite your friends and family to a beach day! No matter what you do, you’ll be taking part in an ancient tradition.

10 responses to “The Summer Solstice: From Ancient Celebration to a Modern Day at the Beach”