Graffiti From Ancient to Modern Times: Memorialization, Human Expression and the Art That Will Not Die

Graffiti has been around since time immemorial.  From ancient caves to carved mountainsides to splendiferous murals, pictures have been splashed and carved on walls and surfaces throughout time and across cultures.  Self-expression, political agitation, vendettas, advertisements—all reasons for some to bring out the paint and depict what moves them most.  There is something inherently primal in the need to memorialize one’s self and time.  Indeed, graffiti’s immediacy and rawness of expression can astonish, whether found deep in the caves of Lascaux or in the modern day artistic gyrations of the anonymous British artist Banksy.

AntiquityNOW brings you a blog post by our partner Ancient Origins that describes a BBC report on how medieval graffiti in English churches are now being catalogued as part of a unique new project.  These renderings are providing an intimate look at people’s lives hundreds of years ago and raising provocative questions about what we thought we knew.    At the end of the post, look at the accompanying curriculum and activities on the history of graffiti from ancient to modern times. And for more on this art form, read AntiquityNOW’s previous blog, Ancient Graffiti:  From Pompeii to Smyrna.

A new project has been set up in England to record the plethora of medieval graffiti found in churches throughout the country, according to a news report in the BBC.  The strange etchings, which include pentagrams, crosses, geometric designs, ships, and what archaeologists call ‘demon traps’, provide fascinating insights into life in the Middle Ages.

The new initiative, known as the Lincolnshire Medieval Graffiti Project, started in Norfolk in 2010 led by archaeologist Matt Champion, but has now been expanded to include Suffolk, Kent, East Sussex, Surrey, and Lincolnshire. To date, volunteer researchers have recorded more than 28,000 images in Norfolk alone.

Champion explained that there are a variety of different theories regarding the symbology of the graffiti and care is needed when interpreting the drawings.

Many of the discoveries have already been the subject of intense debate. For example, researchers discovered the figure of a ‘straw man’ on the walls of the Cranwell Parish Church in Lincolnshire. Brian Porter, Lincolnshire’s medieval graffiti project co-ordinator, believes the figure relates to the pre-Christian tradition of burning a straw man made out of the previous year’s crop and scattering its ashes across the fields. The figure subsequently became a pagan fertility symbol and Mr Porter suggests the Church may have had difficulty stamping out old pagan traditions.  However, Mr Champion doubts that the ‘straw man’ is a genuine pagan symbol. “Not all [Christians] were closet pagans,” he said. Some medieval graffiti could simply be the result of bored church-goers.

Many images and symbols crop up regularly in the Medieval graffiti. For example, sundials are common and almost always appeared on the south wall of a church where the sun passes during the day.  ‘Mass dials’ were also used to tell worshippers when the next service would be held. 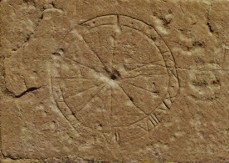 Compass-drawn designs are among the most common types of inscriptions recorded in medieval parish churches (see feature image).  Mr Champion maintains that the compass designs involving a series of circles may have functioned as ritual protection markings designed to ward of the ‘evil eye’, or acted as ‘demon traps’.

It was believed that the demons that roamed through the earth were rather stupid,” said Mr Champion. “They were attracted to bright shiny things and, should they come across a line, then their stupidity and curiosity would cause them to follow that line to its conclusion.

However, Mr Champion does not dismiss the possibility that many of the images amounted to simple doodling and were not necessarily symbolic of anything. Nevertheless, many of the images shed light on the thoughts, beliefs, and lives of people in the Middle Ages.

“It tells you what was going on in people’s minds, churches were not always quiet spiritual places,” said Mr Champion. “We want to record it before it’s lost.”

Featured image: Circles are also very common and in many cases were made to ward off evil. Credit: Lincolnshire Medieval Graffiti Project

4 responses to “Graffiti From Ancient to Modern Times: Memorialization, Human Expression and the Art That Will Not Die”