Ancient Graffiti: From Pompeii to Smyrna 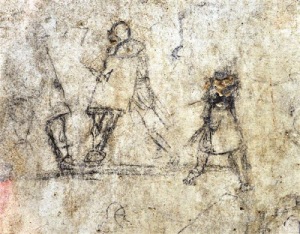 We’ve talked a lot about ancient graffiti in our blog posts and it has always been about the ancient Roman city of Pompeii.  In “Wall Posts: Putting Pompeii’s Political Graffiti in a Modern Context” we discussed how politicians campaigned using graffiti on the walls of wealthy homeowners and in “Super Bowl XLVII and the Superstars of Ancient Rome” we explained how people could find a favorite gladiator advertising olive oil or his latest fight on the walls of the city.  Recently, an archaeological dig unearthed a collection of graffiti that may be even richer than that of Pompeii.  Archaeologists working in the agora (ancient marketplace) of Izmir -or Greek Smyrna- found the “richest Greek graffiti collection in the world” dating back to the 2nd and 4th centuries A.D.

The graffiti provides us with a wealth of information about life in Izmir during the Hellenistic and Roman periods.  It proves once again that we are not so different from our ancient ancestors.  We can read about the pain of unrequited love in one inscription that says “I love someone who does not love me.”  We also see a city that is striving for tolerance and acceptance.  Much of the graffiti includes names of other cities and cultures which would not have been allowed in a city struggling with xenophobia.  There is also evidence of religious tolerance.  While one inscription, “The one who ensouls,” refers to early Christianity, another refers to the ancient Greek gods and says “The gods healed my eyes, this is why I dedicate an oil lamp to the gods.”[1]

There is still so much to learn from this discovery.  Some of the graffiti is composed of riddles that are yet to be solved.  Still more lies beneath layers of plaster that must be carefully removed.  It will be fascinating to see what else we have in common with the ancient citizens of Izmir.

6 responses to “Ancient Graffiti: From Pompeii to Smyrna”