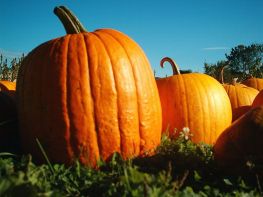 Pumpkin spice lattes, pumpkin cheesecake, even pumpkin spice Oreos! When the leaves start to change and weather starts to cool, pumpkin season is in full swing. Whether it’s carving one or cooking one, pumpkins just put you into the holiday mood. And we aren’t the only ones to appreciate this icon of autumn. The pumpkin has been serving up nutritious deliciousness for centuries. Today we’re bringing you a recipe for 200-year-old pumpkin pie. You can’t go wrong with this time-honored recipe full of ancient pumpkin goodness.

Cucurbita pepo or the pumpkin squash was a major part of the ancient Mesoamerican diet. Remains of the food at the Guilá Naquitz Cave in Oaxaca, Mexico have been dated to between 8,000 and 7,000 BCE.[1] It did not look like the round, plump squash we know and love today. Rather, it was narrower with a crooked top. People relied on its seeds for food instead of its bitter flesh, of which there was very little.[2] Eventually, domestication of the plant allowed for the cultivation of bigger plants with more abundant and palatable flesh, whereby it became even more valuable as a food source.[3] Check out our blog post on Ancient Maya and the Enduring Taste of Pumpkin Soup for a clue as to how these ancient people were enjoying the pumpkin.

The pumpkin emerged in North America around the same time as it did in South and Central America, but separately from those areas. Over thousands of years the northern Native Americans developed an ingenious agricultural technique to grow pumpkins and other squashes. Named the Three Sisters technique by the Iroquois, this early form of companion gardening allowed the natives to cultivate their three most valuable crops—squash, corn and beans—extremely efficiently. The beans grew on the corn, which serves as a “natural trellis,” while the roots of the beans sent much needed nitrogen into the soil to nourish the corn.[4] The squash plants protected the corn’s shallow roots from the weather.[5] It is a sophisticated symbiotic method that evolved over thousands of years and eventually resulted in a form of ancient sustainable agriculture. These three crops were so important that the Iroquois believed the plants were inseparable (as with sisters) and were bequeathed to them by the gods. Indeed, many tribes even ascribed religious significant to the different plant parts.

Once the pumpkins were ready to be harvested, they were used in every conceivable way. The flesh could be cooked by boiling, roasting, baking or drying. The seeds were dried or roasted as well. The meat of the squash was dried and ground into a flour. The skins were dried and used as containers to store other valuable seeds and grains. Nothing was wasted. The whole pumpkin was put to good use in order to sustain the people.

When settlers arrived in the New World, the pumpkin—already grown for more than 300 years by the Native Americans—became a staple in their diet and helped them to survive. In fact, pumpkins were so ubiquitous, nearly every one of the European explorers arriving on North American shores mentioned the pumpkin in his writings. Indeed, the Pilgrims may not have survived at all had it not been for the pumpkin. A Pilgrim poem dated to the 1630’s tells of its importance:

Stead of pottage and puddings and custards and pies
Our pumpkins and parsnips are common supplies,
We have pumpkins at morning and pumpkins at noon,
If it were not for pumpkins we should be undoon.[6]

So it isn’t surprising that the pumpkin only became more and more popular throughout the centuries, eventually becoming a holiday decoration (see how pumpkins replaced turnips—yes, that’s right, turnips—as a Halloween decoration in America) and even a social media meme (thank you, Starbucks)! Pumpkin is now the favorite autumnal flavor thanks to its delightful taste and some savvy marketing.

Here’s a thought. After reading this ancient pumpkin history, you may be yearning for a little pumpkin in your life this season. Why not skip the Starbucks and instead make the traditional, old-fashioned pumpkin pie below? It’s been a palate-pleaser for 200 years. Even your seductively spiced pumpkin latte can’t beat that!

*Adapted from Lydia Child’s recipe in The American Frugal Housewife. Adaptations courtesy of The Washington Times.

One response to “Bon Appetit Wednesday! A 200-Year-Old Recipe for Pumpkin Pie”