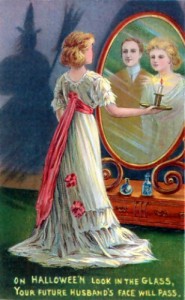 In this 1904 Halloween greeting card, divination is depicted: the young woman looking into a mirror in a darkened room hopes to catch a glimpse of her future husband.

Halloween falls on a Monday this year, which means you can celebrate all weekend! We’re here to make sure your feasting and frivolity is not only fun and delicious, but also ties you back to your ancient past. Check out the links below to learn more about Halloween’s connections to antiquity and scroll down for some yummy ancient treats to make that will be sure to dazzle your trick or treaters! END_OF_DOCUMENT_TOKEN_TO_BE_REPLACED

Posted in Bon Appetit Wednesday, Culinary, Culture, Recipes With a Past 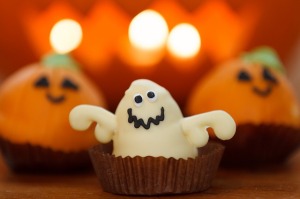 Maybe you’re adding the finishing touches to a costume you’ve been hand-sewing for weeks or maybe you’re scrambling to find last-minute costume ideas on the internet. Perhaps you’re preparing to observe an ancient Samhain or perhaps you’re headed to a modern Halloween bash. No matter how you plan to celebrate tonight’s festivities, it’s almost certainly going to involve delicious treats. Feasting on this night is nothing new. Check out our post The Colorful Past of Halloween Treats to learn more about the ancient origins of this holiday and more importantly, the food!

Also, don’t miss this fascinating slideshow of Halloween being celebrated all over the world.

And here’s a recipe for adorable mini ghost cupcakes. 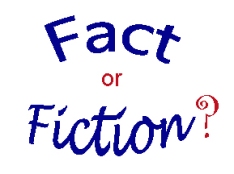 Pumpkins in North America are ubiquitous this time of year, and they are no more evident than on Halloween, when they are on display carved with frightening faces to ward off evil spirits. But did you know that in the Middle Ages in Europe, as a pagan vestige against the growing wave of Christianity, hideously carved turnips were the vegetable of choice to spook the spirits?

Scroll down for the answer!

FACT! As the conversion to Christianity took root in the Middle Ages, pagan influences remained, which was the case with Halloween. It was believed that spirits roamed freely on this fateful night. Turnips were carved in the form of demons to keep evil spirits away. Since the pumpkin was more abundant in America, it became the much more colorful and rotund symbol of nefarious spirits as the Halloween tradition crossed the pond.

Click here to learn more about historic Halloween traditions and to read a scary story about a ghost hunter.

Pumpkin spice lattes, pumpkin cheesecake, even pumpkin spice Oreos! When the leaves start to change and weather starts to cool, pumpkin season is in full swing. Whether it’s carving one or cooking one, pumpkins just put you into the holiday mood. And we aren’t the only ones to appreciate this icon of autumn. The pumpkin has been serving up nutritious deliciousness for centuries. Today we’re bringing you a recipe for 200-year-old pumpkin pie. You can’t go wrong with this time-honored recipe full of ancient pumpkin goodness. END_OF_DOCUMENT_TOKEN_TO_BE_REPLACED

Last Tuesday’s blog explored the neurology of fear and introduced a 2000 year old horror story from Pliny the Younger. Despite its antiquity, this story (actually contained in a missive to an acquaintance by the prolific letter writer) exhibited remarkable 21st century elements. Today’s post is a short story titled “The Ghost Hunter.” Written by Paul Hodge, it is a modern take on storytelling in the gothic style. Notice the common elements with Pliny’s tale: the abandoned residence, unexplained occurrences and a man of doughty character determined to get to the bottom of whatever is going on. END_OF_DOCUMENT_TOKEN_TO_BE_REPLACED