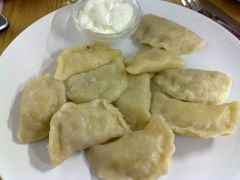 Winter here in the northern hemisphere is showing no signs of abatement, and as the snow piles up, there’s no better time than the present for some good, old fashioned comfort food. Luckily, we’ve got a recipe with a long history of filling the belly and warming the heart. Homemade pierogis are perfect for a cold winter night. We’re bringing you a scrumptious recipe for making your own Polish potato and cheese filled pierogis from scratch. Get the kids involved and make it a fun family activity on a bleak and frigid snow day!

Pierogi are pockets of unleavened dough stuffed with various fillings and then boiled. They are most often identified with Poland, but they are commonly eaten all over Eastern Europe and even in Italy and Germany. No one knows for certain how the pierogi first made its way to Poland, but it is speculated that Marco Polo introduced the dumpling from China in the 13th century and the pierogi developed from there.[1] You can read more about the history of the dumpling and even find a recipe for pork dumplings for the Chinese New Year in our post Bon Appetit Wednesday! Pork Dumplings for the Year of the Horse. Still another theory credits Marco Polo again, but posits that he brought pasta from Italy and that is what began the development of the pierogi.[2] Learn more about the history of the noodle in our post Bon Appetit Wednesday! The Ancient Noodle. There is another theory that names the Tatars (or Tartars) as the originators of the pierogi and says they brought it with them from Eastern Russia as they migrated from the former Russian Empire.[3]

Like many historic foods, it is difficult to know the moment a particular food appeared and what its exact origins were. Generally, there are a number of influential factors that combine at just the right time and a new recipe emerges. Whatever the pierogi’s beginnings, it had an important place in Polish culture from the moment it first entered the cuisine. It was a dietary staple for the peasants because it was easy to make and could be filled with many different ingredients, from meats and vegetables to fruits. According to some 17th century cookbooks, pierogis were made especially to celebrate holidays such as Christmas and Easter, with each holiday having its own variation.[4]

Of course, the pierogi was so delicious it quickly spread from the poor classes through to the middle and upper classes, eventually becoming perhaps the most popular dish in Poland. Today, pierogis are enjoyed all over the world in numerous flavors. You can buy them fresh, frozen or even order them at a restaurant thousands of miles from their homeland. Still, there is nothing like making your very own pierogis with your family or friends, filling those dough pockets with fresh ingredients and sitting down to a warm meal. 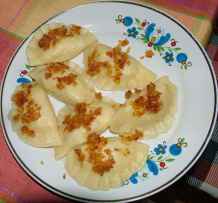 *Recipe courtesy of Sharon Smith. This is Sharon’s grandmother’s personal pierogi recipe, straight out of Poland.

This entry was posted in Uncategorized. Bookmark the permalink.

One response to “Bon Appetit Wednesday! The Ancient Pierogi”