KIDS’ BLOG! Picture This: Pictograms and Petroglyphs and the Stories They Tell

Update! This post was originally published on July 23rd, 2013. In the post below we explore the ancient history of rock art and how we’re still using pictograms to communicate today. Recently, ancient petroglyphs have been back in the news with the discovery of an ancient Aboriginal site in a suburb of Sydney, Australia. Researchers say the site is tens of thousands of years old and has probably been dismissed by locals as graffiti.[1] Actually, it is kind of like ancient graffiti and it helps us see into the past and get a glimpse of what life was like for the ancient people living in the area. The art is made up of hand stencils of things that were a part of everyday life, such as “eels, a spearhead and a crescent-shaped moon.”[2] The images are a particularly advanced form of aboriginal hand stencils in which numerous hands combine to form a particular shape.[3] There’s a waterhole nearby and the petroglyphs are on a rock overhang so the artists were probably living in this spot, using the rock for shelter and fishing out of the waterhole. Because of the size of the hands, researchers have concluded that this site was created by women and children.[4]

Isn’t it incredible how we can learn about people that lived tens of thousands of years ago just by looking at the pictures they left behind on rock walls? Read more below and don’t miss the activities at the end of the post. We’ve added a new Aboriginal Hand Stencil Activity!

And next Tuesday look for our new Lesson Plan to go along with an Ancient Origins blog post about ancient rock art.

Also, Ancient History Encyclopedia has a fascinating new article about the meaning of rock art in Europe. There’s so much to learn about our ancient ancestors!

Prehistoric painting from the Lascaux caves. Image courtesy of Peter80.

More than 6,000 years ago people were telling stories, not with words as we do today, but with pictures.  This is during a preliterate time of human existence, or a time before language was written down and people were able to read and write. A pictograph is a “picture” of a person or idea.  Ancient peoples painted on rocks and caves the stories of their lives and the things that were important to them, such as hunting animals, celebrations and decorative art.  Below are pictures from the Lascaux Caves (Figures 1&2), which are a series of caves in France famous for their paintings from the Paleolithic Era.  This era or period of time started around 2 million years ago and is when humans began to live together in small societies or bands and use stone tools. How old are these paintings in the Lascaux Caves?  More than 17,300 years!  The paintings show the large animals alive at the time, which from fossil evidence we know really did exist. 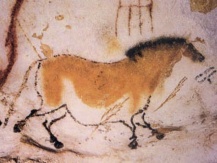 For more pictographs and to see how they can be classified, click here.  This site shows you ancient rock art in Arkansas.

Another way that pictures were created is as petroglyphs, or pictures that were carved or scraped into rock rather than painted.  This rock art is able to be seen throughout the world in thousands of cultures that lived and died, but whom we can remember today because of these wonderful pictures in rock.  The petroglyphs below (Figures 3&4) are from the “Newspaper Rock” site in Utah, known for its many figures and forms.  Certainly these ancient people had a lot to say.

For more pictures, see these amazing petroglyphs from around the world at http://geology.com/articles/petroglyphs/more-petroglyphs.shtml. 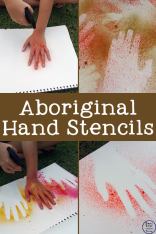 4 responses to “KIDS’ BLOG! Picture This: Pictograms and Petroglyphs and the Stories They Tell”