Buildings of the Future With Foundations in the Ancient Past

UPDATE! This post was originally published on December 16, 2014. In the post below we discussed some ancient building techniques that are being employed in creative and practical ways. These techniques, while thousands of years old, are being utilized in modern constructions because they are sturdy, economical, efficient and sustainable. Today we’re bringing you one more ancient innovation: bamboo. Bamboo is one of the oldest building materials and has been used extensively in South America, Africa and especially Southeast Asia, all areas where it grows in abundance. Incredibly, even though bamboo is strong, beautiful and plentiful, in ancient times it was thought of only as a building material for the very poor.[1] Those who could not afford more lavish materials were forced to pull from their surroundings, and since bamboo was always at hand, it became the most employed. Even today in China, bamboo is referred to as “the poor man’s timber” and is not “accepted as a modern building material.”[2] However, this opinion is rapidly changing as forward-thinking architects around the world have begun to praise bamboo’s unique and valuable qualities. For example, bamboo is light and flexible, and bamboo buildings have been found to withstand earthquakes far better than those made from other more modern materials.[3] Also, while wood can take several decades to mature and be harvested, most bamboo can be harvested after growing for three to six years. In fact, there is one species that only takes two months to mature.[4] Compared to other building materials, bamboo can be processed with relatively little energy and only a limited amount is needed to build an entire house.[5] It can be combined with plywood and steel to create uniquely strong buildings able to withstand natural disasters.[6] 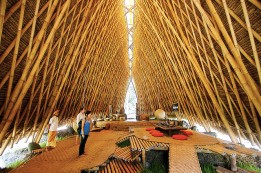 Elora Hardy is a designer envisioning a bountiful future for bamboo.  She is creating bamboo buildings in Bali that inspire the imagination and are helping the world to see how beautiful and sustainable bamboo architecture can be. She and her team focus on the strengths of bamboo as a material and have found ways to work with and around any “perceived weaknesses” such as “degradation by pests, moisture, and weathering, as well as the inability to easily produce large flat panels.”[7] Check out her video and TED talk to learn more about her important work, and view her stunning creations using bamboo, an ancient material promising remarkable possibilities.

The winter solstice takes place this coming Sunday and even though it is the first day of winter, much of the United States has been enjoying some of the warmest temperatures on record (click here to read more about the ancient history of the winter solstice). Meanwhile, the West Coast was just pummeled with a massive storm and November was unusually snowy in many parts. Earth is constantly evolving with its changing temperatures, shifting plates and rising sea levels. In the 21st century, our planet is on a roller coaster ride of unpredictable events. As a result, we are now questioning how to best exist on this tempestuous sphere. And sometimes, we’re even looking for alternatives.

When we look to the future and the designs of the dwellings we’ll call home, whether it be on this planet or another, it is amazing how often we actually look to the past. Winners of design competitions, innovative new architectural firms and the builders of the future continue to be inspired by the ancients. Here are a few ideas, rooted in the past, but designed to tackle our present and future needs.

The Mapungubwe Interpretation Center and Vault201

In 2009 and 2010, MIT professor of civil engineering and architecture John Ochsendorf set out to prove that the vault design of antiquity is actually the perfect solution for the future, coupled with 21st century green engineering. First he completed, along with Michael Ramage from the University of Cambridge, the Mapungubwe Interpretation Center in South Africa, for which they were awarded the David Alsop Sustainability Award at the 2009 IStructE Structural Awards and World Building of the Year at the 2009 World Architectural Festival. Ochsendorf and Ramage used the timbrel vaulting technique, a design that emerged in the 14th century and is found throughout the Mediterranean. The timbrel vault originally evolved from the Roman vaults that are featured in many ancient structures that continue to stand today. Even the name for the vault style is historical: Timbrel is an ancient musical instrument similar to a tambourine with a tightly-stretched surface.[1] This vaulting technique “saves large amounts of building materials and thus embodied energy,” making it an inexpensive building method.[2] Sunlight illuminates the rooms easily during the day and the ventilation is due to “open-air rooms without walls yet covered above to take advantage of breezes and shade.”[3] For additional comfort, “(r)eflecting ponds are placed around the perimeter of the building to cool the air that naturally passes through the structures.”[4] Masons who were brought to work on the Mapungubwe Interpretation Center were taught to employ local materials and recyclable items to make the tiles. They in turn took these ideas back and applied them in the building of homes and structures in their own villages.[5] 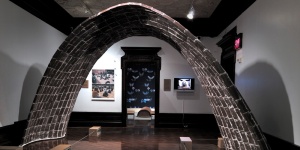 Ochsendorf brought his ideas for modern construction back to the United States in the form of a vaulted prototype built entirely to scale and selected for exhibition at the Cooper-Hewitt National Design Museum in New York City. Vault 201 was created to demonstrate that “sturdy, eye-pleasing structures can be built inexpensively out of local materials.”[6] The structure is extremely strong and made entirely from “100% post-consumer waste.”[7] In fact, Ochsendorf was so eager to prove that this ancient and sustainable design and construction was more than just beautiful, he climbed to its top to demonstrate its strength. 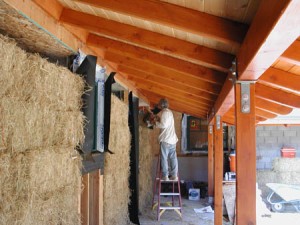 Straw bale construction is the process of stacking compressed bales of straw in order to create the walls of a structure. Although the specific technique of straw bale has only been in use since the 1800’s, the use of straw in construction dates back millennia. There is evidence to suggest that houses in the African prairies were being built using a mixture of straw and mud in Paleolithic times and straw houses built in Germany over 400 years ago are still standing today. The natives of North America even used it to insulate their teepees.[8] It is a cheap, readily available resource that can be used for insulation, made into building material or even used in the construction of a thatched roof.

Today, many architects are turning to this ancient construction method as a way to build sustainable homes and other structures. There are many advantages to straw bale construction and some are very surprising. For example, homes made from straw bale are less susceptible to earthquakes, wind damage and even fires. The tightly-packed straw bales stand up easily to extreme temperatures, and as well resist fire and bend without crumbling in an earthquake and strong winds.[9] Straw bale construction is also soundproof, energy efficient because of its high R-value[10] and environmentally friendly because it makes use of straw that would otherwise be burned (causing pollution) and disposed of (incurring waste).[11]

There are many modern straw bale construction projects:

HOMES FOR THE RED PLANET

In August of this year, NASA and Makerbot held the Thingiverse Mars Base Challenge to design and 3D print a human habitat for our potential future on Mars. Both second and third places were inspired by ancient designs. MakerBot CEO Bre Pettis remarked, “We really loved seeing how the designs in the Mars Base Challenge were often inspired by structures here on Earth that have withstood the passage of time and harsh weather elements.”[16]

The Athenian Acropolis is the supreme expression of the adaptation of architecture to a natural site. This grand composition of perfectly balanced massive structures creates a monumental landscape of unique beauty consisting of a complete series of masterpieces of the 5th century BC. The monuments of the Acropolis have exerted an exceptional influence, not only in Graeco-Roman antiquity, a time when in the Mediterranean world they were considered exemplary models, but in contemporary times as well.[20]

What kinds of buildings will we live and work in 1,000 years from now? Will they be on other planets, at the bottom of vast oceans or floating in the clouds? Wherever our creative endeavors take us, we must pay homage to our ancestors, the progenitors of architectures that survive today. As we erect our monuments of 21st century ingenuity, let us acknowledge how we are now turning to our ancestors’ moments of genius to spark our next big jump forward. So imagine the far horizons ahead. And thank the ancient dreamers who made it all possible.

[2] Alter, L. (n.d.). Bamboo Houses Stand Up To Earthquakes. Retrieved May 21, 2015, from http://www.treehugger.com/green-architecture/bamboo-houses-stand-up-to-earthquakes.html