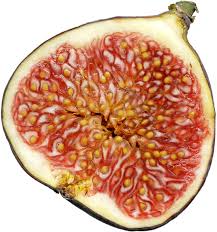 We are so excited about today’s Bon Appetit Wednesday. It marks the beginning of a series on the succulent fig. As we all know, there is nothing more exciting than a good fig recipe! Okay, now that may be a bit of an overstatement, but in all seriousness, these little ancient fruits are amazing. There are so many ways to use the fig, which have been filling the bellies of our ancestors for thousands of years. Because the fig has been around for so long and has had such an impact on history, we’re devoting more than one post to its story. So whet that appetite and enjoy the glorious tale of the fig.

Nine subfossils of sterile figs dating back to 9400–9200 BCE suggest figs may be the very first instance of agriculture, having been domesticated even before wheat, barley and legumes.[1] Further evidence of the ancient cultivation of the fig has been found in fig remnants from Neolithic sites dating back to 5,000 BCE.[2]

Ancient Rome and ancient Greece both had close relationships with the fig. In Greece, it was believed that Demeter, the goddess of agriculture, harvest and fertility created the fig tree. They were a dietary staple and it was illegal for to export them. Interestingly, the word “sycophant” is a direct result of Greece’s close ties to the fig.

In ancient Athens, in particular, figs were an important part of the diet for both rich and poor. Due to the fact that the Athenians were particularly fond of figs, they were nicknamed “sycophants”, which originally meant fig-eaters. Later, when members of the same population informed authorities of illegally exporting figs from Attica, the word assumed its modern meaning![3]

Figs were a part of the creation mythology of Rome. It is said that the wolf that suckled Romulus and Remus rested under a fig tree, the Ficus ruminalis. Figs were considered sacred and given as gifts at the New Year. Indeed, they held an important symbolism. Pliny opined “when figs dry up, it is always a sign of foreboding, and priests should ensure that another one is planted.”[4]

Figs were a major staple of the Roman diet and many recipes included the diminutive fruit. Cato said about the Roman housewife, “She must have a large store of dried pears, sorbs, figs, raisins, sorbs in must, preserved pears and grapes and quinces […] and other fruits that are usually preserved, as well as wild fruits. All these she must store away diligently every year.”[5]

Today’s recipe comes directly from the ancient Roman cookbook by Apicius, De Re Coquinaria. As with all Roman recipes, there are no exact measurements, so you are free to experiment and make the recipe your own!

And don’t forget to come back next week for more figgy history and another delectable fig dish!