Two Thousand Years and the Sexual Male: The Angst That Never Changes 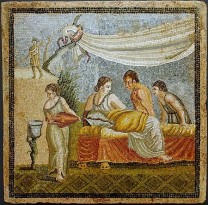 Romantic scene from a mosaic (Villa at Centocelle, Rome,
20 BC–20 AD)

Sexuality. Exciting, erotic, passionate, heartbreaking. Perhaps no other human behavior is so fraught with identity, especially for men. In countless cultures throughout time, the sexual male has been idealized and his prowess pivotal in terms of his place in society. Of course, there were shifting sexual mores throughout the centuries, but male sexuality largely remained a highly prized trait regardless of culture, time or geography.  Today, with the advent of modern science and psychology, we now realize that male sexuality is weighted with conflicting emotional and societal consequences. More jarring to the traditional paradigm is the fact that male sexuality and the entitlement it bestowed are now being challenged.  We have the roles of heterosexual and LGBTQ men and women as well as non-gender conforming individuals evolving in the twenty-first century to inevitably create new paradigms of identity and new ways of relating to each other.

As we see below, however, some things haven’t changed, or at least make for interesting comparisons. Two poems, written thousands of years apart, speak to the anguish of a man facing the inescapable diminishing of years and the sexuality that defined him. END_OF_DOCUMENT_TOKEN_TO_BE_REPLACED

Marble terminal bust of Homer. Roman copy of a lost Hellenistic original of the 2nd c. BC. From Baiae, Italy. In the British Museum.

Throughout time, poetry has been one of the most evocative of art forms.  From ritual chanting and epic histories to love sonnets and modern free verse, poetry has represented the essence of what it is to be human.  Since April is National Poetry Month in the United States, let’s take a look at the origins of this artistic device.  As well, we’ll observe a unique poetry tradition recast with a 21st century perspective. We’ll see how poetry is giving voice to women in Afghanistan, who as with early cultures that forged their identities in verse, are tapping the extraordinary power of poetry to create their own sense of “self.” END_OF_DOCUMENT_TOKEN_TO_BE_REPLACED