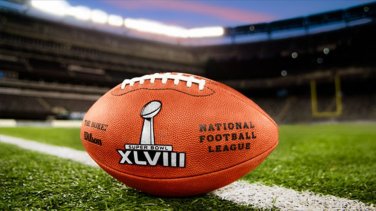 Bon Appetit Wednesday! on January 22 showcased this recipe—strategically posted between National Popcorn Day and the National Football League’s Super Bowl XLVIII in the United States—and described the relationship between the Aztecs, popcorn and chocolate.  In honor of the Super Bowl being played today, we are re-posting the recipe for the football parties being held far and wide. But so you know, fans of the Denver Broncos and Seattle Seahawks may want to take a page from Aztec sporting history as kickoff approaches.

It is believed that the Olmec Empire (1200 BCE – circa 400 BCE) originated the ballgame that was later played by many Mesoamericans, including the Mayans and Aztecs.  The Aztec game was known as ullamaliztli and was so culturally important as to be the second construction of any new settlement after the shrine to the god Huitzilopochtli.  Employing an ulli or nine-pound hard rubber ball (rubber was a common substance in Mesoamerican life), the game required using the elbows, knees, hips and head—but never the hands—in keeping the ball aloft, sometimes for more than an hour at a time.  The game was played on an I-shaped court called a tlachtli or tlachco with surrounding areas for spectators and skull racks called tzompantli for sacrificial victims. 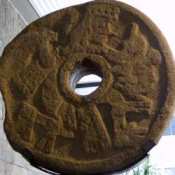 An actual ring used in the ancient Mesoamerican ball game, Ullamaliztli.
(On display in Mexico City)

Some courts had vertical stone hoops for the balls to pass through, which if so happened, would immediately signal the end of the game.  However, that feat seems almost impossible given the hoop dimensions.  Sometimes players wore protective gear of deerskin but nonetheless were often bruised and bloodied by the speed and ferocity of the sport.  And as with any competition, stakes could be high.  Research posits that some losing teams were sacrificed (and possibly winners as well since sacrifice was considered an honor), gambling was rampant (with property, personal freedom and even children wagered) and political disputes resolved.  The game also had religious significance:

It was meant to mirror the ball court of the heavens, this [the earth] being the ball court of the underworld where the sun passed each night. The game represented the battle between day and night, and so was also related to the human blood sacrifices that were intended to keep the sun moving in the sky.[1]

Today’s version of ullamaliztli is known as ulama and has a number of variations—with less carnage—in different countries.

So when you dig into that bowl of Aztec Chocolate Caramel Popcorn and watch the Broncos and Seahawks battle to final victory, just think of the historical sweep of competition, politics, religion and snacks.  And in the case of our Aztec popcorn delight, victory—or defeat—never tasted so sweet. 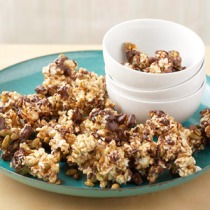 *Make Ahead Instructions: Place popcorn in an airtight container; cover. Store at room temperature for up to 1 week.

Wilkerson, S. Jeffrey K. (1991). “Then They Were Sacrificed: The Ritual Ballgame of Northeastern Mesoamerica Through Time and Space”. In Vernon Scarborough and David R. Wilcox (eds.). The Mesoamerican Ballgame. Tucson: University of Arizona