Roman Gladiators: How They Compare to Modern Sporting Heroes 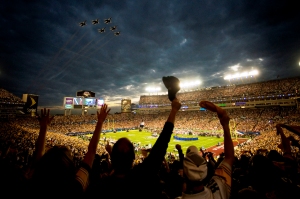 UPDATE!  This post was originally published on April 4th, 2013. American football season is in full swing and the players are back in the news for their behavior on and off the field. As the NFL grapples with scandal, the game goes on and fans all over the country are gathering each week, suiting up in their best team apparel, breaking out the tailgate, switching on the big screen or even traveling to the stadium to cheer on their favorite players and teams. We thought this would be a perfect time to republish this post about the similarities between our modern sporting celebrities and the ancient heroes of the gladiatorial games. You’ll be amazed to learn how much our modern athletes have in common with their ancient counterparts. And don’t miss Part 1 of this 2-part series, Super Bowl XLVII and the Superstars of Ancient Rome, which illuminates even more fascinating comparisons. END_OF_DOCUMENT_TOKEN_TO_BE_REPLACED

Bon Appetit Wednesday! on January 22 showcased this recipe—strategically posted between National Popcorn Day and the National Football League’s Super Bowl XLVIII in the United States—and described the relationship between the Aztecs, popcorn and chocolate.  In honor of the Super Bowl being played today, we are re-posting the recipe for the football parties being held far and wide. But so you know, fans of the Denver Broncos and Seattle Seahawks may want to take a page from Aztec sporting history as kickoff approaches. END_OF_DOCUMENT_TOKEN_TO_BE_REPLACED