Mulan: The Journey From Ancient Tale to Disney Blockbuster 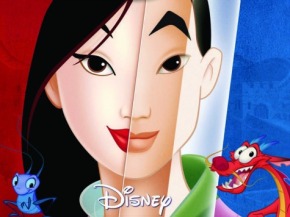 In our blog series on the historic origins of Disney films, we’ve found that being literary archaeologists pays off. Digging into these films reveals layer upon layer of historic events and tales from all over the globe, each serving as inspiration for the next generation of storytellers, and culminating in the present-day retellings that we now experience at the movies.

Disney’s Mulan, which came out in 1998, is based on one of the most enduring folktales in the world. According to legend, Mulan was a young Chinese woman who went to war in place of her father, fighting for 12 years before retiring with high honors from the Chinese military, the secret of her true identity still intact.

A panel from “The Ballad of Mulan.”

The legend was originally transcribed in “The Ballad of Mulan” over a thousand years ago by an unknown author in an anthology that has since been lost to history. The ballad, which is just 31 couplets, describes Mulan’s successful military career during which she concealed her gender from her fellow soldiers. She ultimately leads a battle that wins the war and is honored by the emperor. Offered a cash reward and a high post in the army, she asks instead to return to her parents. When she arrives home, she simply puts on her traditional feminine garments, dabs on some makeup and takes up life as a woman again.[1]

In the 11th or 12th century, the story of Mulan was documented in another anthology, the Collected Works of the Music Bureau, compiled by Guo Maoqian.Here it appears as both a poem and a song, with the story lines slightly tweaked. It was the first of the many permutations that the tale would undergo.[2] 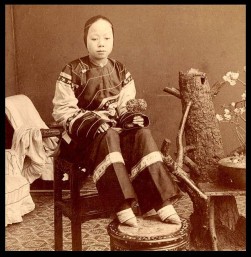 A woman whose feet are bound according to the Chinese tradition. Image courtesy of Okinawa Soba on Flickr.

Mulan was left untouched for nearly five hundred years after the Collected Works of the Music Bureau. She next made an appearance on stage in the popular 16th-century drama by Xu Wei, The Female Mulan Replaces Her Father in the Military. Taking many liberties with the original folktale, the drama was designed for maximum entertainment value. The play is full of plot twists, songs (Chinese dramas in this period resembled what we consider operas), a fictional bandit named Leopard Skin whom Mulan vanquishes in battle, and a scene in which Mulan unbinds her feet as she prepares to join the army – which would have been titillating for male members of the audience, as the Chinese considered a woman’s foot to be an erotic body part.[3] (Foot-binding was a traditional practice of women in ancient China, although not in the region Mulan is typically said to be from. Xu Wei, however, was not bothered by such historical inaccuracies.) 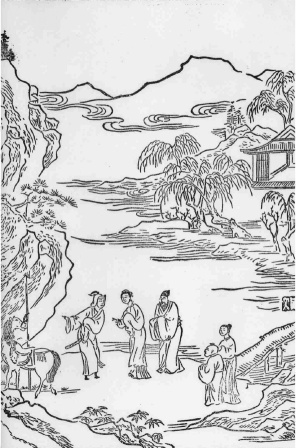 After Xu Wei’s play, adaptations of the Mulan story proliferated. Another popular retelling was the 17th-century historical romance novel Sui Tang Yanyi by Chu Renhuo. In this version, Mulan meets with an unhappy end, committing suicide when, after long and faithful service in the army, she is summoned to be the concubine of a Turkish khan. Renhuo’s novel portrays Mulan as a fierce loyalist rather than a daughter motivated by the desire to protect her aging father. An early advocate for women’s rights, Renhuo has Mulan declare that her reason for going to war is that male warriors are incompetent: “Feeling ashamed that there were not many loyal subjects and filial sons among men, I decided to take the risk to dress myself as a man.”[4]

Despite the changing roles Mulan’s character has been required to play over the last thousand years, she has always been portrayed as a woman of strength and talent. Mulan has been the subject of poetry, dramas, films, television series and video games. She even has a crater on Venus named after her.[5]

The “Song of Mulan” by Wei Yuanfu, written in the 11-12th century and included in Maoqian’s anthology, has an ending that foreshadowed the tale’s enduring appeal:

If in this world the hearts of officials and sons
Could display the same principled virtue as Mulan’s,
Their loyalty and filiality would be unbroken;
Their fame would last through the ages—how could it be destroyed?[6]

Mulan’s fame has certainly lasted through the ages—her animated character in Disney’s film is one of her latest reincarnations. While the medium through which we tell her story changes, and the plot itself is open to artistic revision, the subversive message of female empowerment has remained at the legend’s heart these thousand years.

One response to “Mulan: The Journey From Ancient Tale to Disney Blockbuster”