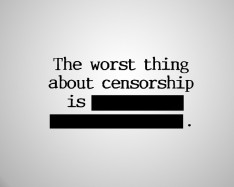 The life of Socrates is in the hands of 500 reticent jurors. He stands trial for poisoning the minds of Athenian youth and inspiring rebellion with anti-democratic teachings. Silently, the jurors cast their ballots into one of two urns that represent guilt or innocence…

Socrates was found guilty and sentenced to death. Shielding the public from dangerous ideas outweighed one man’s right to free expression on the scales of Athenian justice. Throughout history, society’s weighing of public good against individual rights has shaped the history of censorship. It’s a dilemma both ancient and familiar.

AT FIRST, CENSORSHIP WAS A BIT ONE-SIDED

Plato (a former student of our fallen philosopher, Socrates) was a champion for strict censorship. He feared a moral citizen’s soul could become unsettled if exposed to the wrong content.[1] Plato’s belief was enthusiastically supported in the ancient world. In the earliest days of censorship, public good was of foremost concern and individual rights were inconsequential.

In ancient Rome, the role of censor was an official and honorable office. Shaping the character of the public was part of good governance, and strict censorship was a critical component. 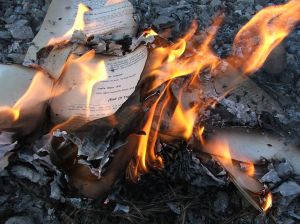 Across the globe, other anxious authorities turned to fire to preserve morality. After all, ideas that are reduced to smoke and ash don’t spread. In 168 BCE, Antiochus IV captured Jerusalem and ordered that all copies of the Jewish Law were to be burned.[2] In China, 213 BCE, in an effort to consolidate his reign and wipe out all prior history, Emperor Qin Shi Huang ordered the destruction of many history and philosophy books, including all books related to Confucianism.[3] In 1193 CE, Muslim invaders burned the Library of Nalanda University, which held hundreds of thousands of volumes filled with Buddhist and Hindu knowledge.[4] Colonization presented its own challenges. Wary Spanish invaders arriving in North America torched a lion’s share of the Mayan codices in fear of the ideas they might contain. These are just a few examples from the myriad that exist. Book burning was a widely-used and fiercely destructive tool of censorship for thousands of years.

Some took a more proactive approach to censorship, not wishing to dirty their hands with bibliocide. By 1543, the Catholic Church decreed that no books could be printed or sold without their express permission. Charles IX of France followed closely on their heels, extending this right to the king. Other leaders followed suit.[5]

And then, when one nation was founded on principles of individual liberty, censorship changed forever.

America put individual rights on a pedestal when writing the Constitution, but that didn’t mean Americans could slip into moral turpitude by expressing themselves with reckless abandon. Censorship was far from dead, and the invention of mass entertainment added a layer of complexity to its historical development. The dilemma of weighing public good against individual rights was destined to be reframed with the invention of every new entertainment medium. Let’s examine some of these mediums and take a closer look at ancient dilemmas in light of modern perspectives.

IDEAS IN INK AND PAPER 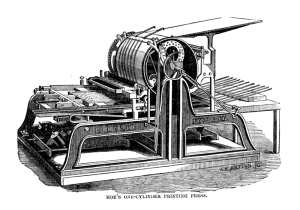 Ancient Dilemma Reframed: Does the First Amendment of the Constitution of the United States protect the individual rights of authors who write about topics that could damage the public good?

Outside of these decisions, small groups of people with large opinions about banning books dominated the history of book censorship in America. Most events occurred locally, flying under the radar of the court system. But others were watching.  In the late 20th century, more than 1,000 attempts at censorship were reported a year, according to librarians and educators. 3 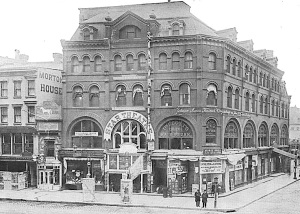 Movies began to dazzle American audiences in the 1890s. Screens in darkened theaters exploded in a sensory feast of light and sound that captivated people in hordes. By 1914, there were 18,000 theaters admitting 7 million customers daily![6]

Ancient Dilemma Reframed: Do individual rights surpass the need to protect public good in a medium for expression as dangerously seductive as motion pictures?

They (motion pictures) are mere representations of events, of ideas and sentiments published and known; vivid, useful, and entertaining, no doubt, but, as we have said, capable of evil, having power for it, the greater because of their attractiveness and manner of exhibition.[7]

Movies merit no First Amendment protection? The decision in Mutual Film Corporation v. Ohio Industrial Commission was a blow to the budding film industry. They needed to behave to avoid official meddling in their content, so they pursued aggressive self-regulation for about 50 years. Then as they might say in Hollywood, there was a twist in the story.

The decision in the case of Joseph Burstyn v. Wilson granted movies First Amendment protection, reversing Mutual Film Corporation v. Ohio Industrial Commission. With that decision, the industry’s self-regulation policies lost their solvency. Combined with changing moral standards and the looming competitive presence of television, it was curtains for self-regulation. The system was replaced by the ratings we know and love today. 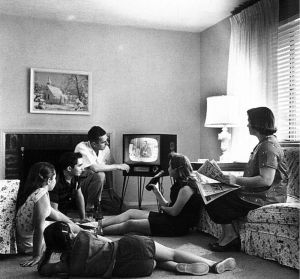 Unlike books and movies that you could cherry-pick, television was broadcast over the airwaves, a shared resource. It was accessible to anyone and gained enormous popularity with lightning speed. By the 1950s, Americans owned 50 million televisions.[8]

Ancient Dilemma Reframed: What topics on television should be restricted to maintain public good?

The answer to this question depends on: 1) the majority preference of the public; and 2) the amount of backlash received when something goes wrong. For example, a distraught father went straight to the United States Federal Communications Commission after seeing George Carlin’s Seven Dirty Words on air.  The resulting Supreme Court Case, FCC v. Pacifica, determined that the FCC has the right to regulate indecent material. Indecent referred to repetitive expletives in this case. Applications of the word “indecent” shall doubtlessly change as times change.

What do television airwaves and a national forest have in common? They’re both considered natural resources, owned and shared by the public and therefore subject to regulation.  The Federal Communications Commission was created in 1934 with this in mind. Interestingly, despite the existence of this regulatory body, TV broadcasters decades later nonetheless pursued self-regulation specifically to avoid interference. At first, they used classic American values to guide them. For example, they decided for themselves that married couples shouldn’t share a bed on television.

When new technology enabled broadcasters to determine audience preferences based on quantifiable ratings, they were in for a shock. Audiences were actually demanding racier themes. Before long, networks found themselves navigating the conflicting interests of a diverse society with segmented values. The diversity of opinion on television content is illustrated nicely by these quotes from two Supreme Court Justices talking about the same case, that of the Federal Communications Commission v. Fox Television Stations:

The commission could reasonably conclude that the pervasiveness of foul language, and the coarsening of public entertainment in other media such as cable, justify more stringent regulation of broadcast programs so as to give conscientious parents a relatively safe haven for their children.[9]

As any golfer who has watched his partner shank a short approach knows, it would be absurd to accept the suggestion that the resultant four-letter word uttered on the golf course describes sex or excrement and is therefore indecent.[10]

THE CAPITAL “I” IN INTERNET 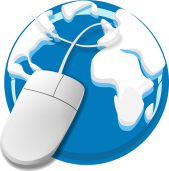 The Internet is close to our hearts because it’s where we may say whatever we want. Beyond entertainment consumption, the Internet holds the power of self-expression. That’s why the public has fought harder for free Internet than for any other medium.

Ancient Dilemma Reframed: Can we censor and restrict Internet content to protect the public good?

Many laws have been proposed, rejected and passed in the Internet censorship adventure, but the public will always speak out if they feel their online freedoms are hindered. Take computer programmer Tim Bray for an example. He suggested the HTTP status code 451 to indicate when a page was blocked for legal reasons. This was a nod to Fahrenheit 451, a novel by Ray Bradbury in which books are burned outright to avoid the complications of conflicting opinions on morality. 7

Censorship moves and evolves with society like an ever present shadow. At times it can dim, stretch and distort, but always mirrors what cast it. Censorship will remain our shadow as we struggle to find the perfect balance between public good and individual rights. What new challenges will the next big thing hold?

[9] History of Censorship in The U.S.A

[10] Eva Galperin, “This Week In Internet Censorship: Alarming Internet Decree in Vietnam, Arrests in Oman, and a Tribute to Ray Bradbury”, 6.16.2012.