A Primer on Democracy: Where to Learn More 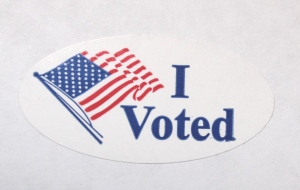 Today is voting day for the general mid-term elections in the United States. In honor of Americans flexing their right to vote we’ve put together a list of great sites to visit to learn more about democracy throughout history.

Of course, formally, it started with the Greeks. In the 4th century BCE the Athenians developed “an extraordinary system of government, whereby all male citizens had equal political rights, freedom of speech, and the opportunity to participate directly in the political arena.”[2] Read more in this article on Athenian Democracy from Ancient History Encyclopedia.

IS THE U.S. REALLY A DEMOCRACY?

A ballot voting against Themistocles, son of Neocles, under the Athenian Democracy. Circa 482 BCE. Image credit: Marsyas on Wikimedia Commons.

The United States has always pointed to the Athenian democratic government as the model on which its government was built. However, the United States CIA (Central Intelligence Agency) actually classifies the U.S. form of government as a “constitution-based federal republic.”[3] The truth is that a constitution-based federal government and a direct democracy are very similar. To learn more about the similarities and differences and to help separate fact from fiction when it comes to the U.S. and Athenian ties, check out the article What are the origins of democracy? from How Stuff Works.

HOW’S THE ROMAN REPUBLIC FIT INTO ALL THIS 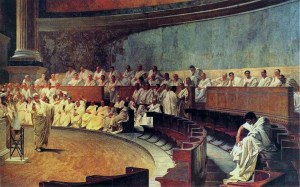 Representation of a sitting of the Roman Senate: Cicero accuses Catiline. From a 19th-century fresco.

DID THE ATHENIANS REALLY START IT ALL? 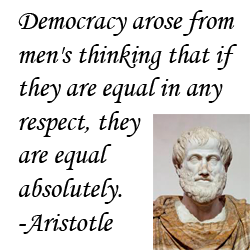 Although the Athenians get credit for bringing the democratic form of government into the world, the fact is there is evidence that forms of democracy existed in many other parts of the world long before the Athenians began casting votes. In fact, democracies most likely existed in prehistoric times. According to R. Dahl in Prehistoric Forms of Democracy,

It is plausible to assume that democracy in one form or another arises naturally in any well-bounded group, such as a tribe, if the group is sufficiently independent of control by outsiders to permit members to run their own affairs and if a substantial number of members, such as tribal elders, consider themselves about equally qualified to participate in decisions about matters of concern to the group as a whole.[4]

You can learn more about prehistoric democracy as well as democracy as a concept in Encyclopedia Britannica Online’s article Democracy.

DEMOCRACY AROUND THE WORLD

Today many countries claim to have a democratic form of government. Some are entirely democratic while others are only partly so. There are variations and subtleties and quite a large gray area when it comes to a strict definition of democracy. The Nobel Prize organization defines democracy strictly as being “ruled by the people” and states that “democracy is a human right.”[5] To learn more about democracy across the globe, visit the nobelprize.org Democracy Map.

2 responses to “A Primer on Democracy: Where to Learn More”