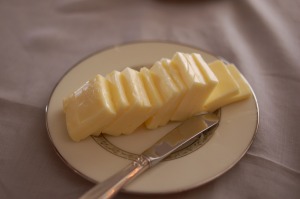 In the movie Julie & Julia, Paul Child says to his wife, the soon-to-be world-acclaimed chef Julia Child, “You are the butter to my bread, and the breath to my life.”  What more apt way to express the depth of a love than comparing it to the sustenance of life?

We may not convey our affection in quite the same way as Paul Child, but the sweet, salty, creamy goodness that is butter has had a memorable history, one that is certainly cherished by foodies and non-foodies alike.  Indeed, butter adds an element of deliciousness to everything it touches and has been doing so for thousands of years. Today we’re bringing you a healthy and savory way to eat butter with a recipe for Asparagus With Curry Butter. First, let’s find out just how far back this delectable ingredient goes. (And don’t miss our previous Bon Appetit Wednesday post on the history of curry.)

The oldest evidence of butter-making comes from a Mesopotamian tablet circa 2,500 BCE that illustrates the steps to make butter.[1] The ancient Hebrews also made several mentions of butter production in the Old Testament. The original method was to use goatskin in order to make a churn into which the cream was poured. Then, the churn was suspended, often from tent poles, and swung around until the butter emerged.[2] The word butter is believed to have come from the Greek word bou-tyron meaning “cow cheese,” but it may also have come from one of the Scythian languages.[3]

In ancient Greece, Rome and Egypt butter, as with many other spices and foodstuffs, was used not only as a food, but also medicinally and cosmetically. It was massaged into the skin to soften and smooth it and into the hair to make it silky and shiny.[4] It was routinely used in poultices to heal burns and infections or even to help with eye problems.[5] 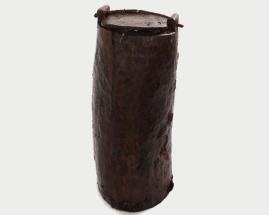 The ancient cultures that prized butter the most highly were those of the British Isles and Northern Europe. Today, the most common archaeological finds in Ireland are barrels of ancient butter that have been buried for centuries in peat bogs.[6] In fact, a 3,000-year-old 77-pound barrel was found in 2009 buried in a bog in Kildare, Ireland.[7] (Check out our previous post on Ancient Irish Oatcakes, which are always eaten with a big helping of Irish butter.) The Norseman used the same method of production, first flavoring the butter heavily with garlic and then burying it for years to allow it to mature. It was often left for so long that a tree would be planted to mark the spot of its burial.[8] The “cool, antiseptic, anaerobic, and acidic properties of peat bogs” ensured the butter wouldn’t rot and even today, though the substances found in the dug up barrels is no longer butter, it is also “far from putrefaction.”[9]

As time moved on, so did the process of butter-making. In the 17th and 18th centuries butter was made in the home and was often a point of pride for the women who were charged with making it. Over the next centuries, as people moved into cities and off farms, commercial butter manufacturing became the norm. Marketing in turn became important, as seen in how one Philadelphia manufacturer 1877 described his product:

Our idea is that butter — such butter as would give a man an appetite to look at, to smell of and taste of — is as far removed from an oily, fatty, or tallowy substance as possible… a firm, fine- grained article, of rich golden color, sweet, nutty aromatic smell and unctuous taste, put up in pound or half-pound lumps, whether square or round, and which, when opened out from its moist, then white linen wrapper, invites both the senses of smell and taste.[10]

Today, butter-making takes place in high-tech, sanitized factories with machines doing the laborious mixing and packaging. Similar to many other ancient food products, modern butter comes in a myriad of flavors and varieties to suit every preference and for every cooking need. However, it’s still that simple spread of plain butter on warm bread that arouses the heart and palate for one of life’s greatest and most sustaining pleasures.

[6] Butter Through the Ages.

[8] Butter Through the Ages.

[10] Hazard, W. (1877). Butter and butter making, with the best methods for producing and marketing it. Philadelphia: Porter & Coates.