The History of Fireworks: Celebrating Life’s Moments in Color, Light and Sound

Displays of fireworks are widely used on festive occasion, as at the opening ceremony of Beijing Olympic Games, 2008.

Fireworks are used by many cultures to celebrate holidays and important events. Their spectacle unites people and commemorates cultural milestones. Kaleidoscopic bursts against the night sky, spirals of colored fire, glimmering waterfalls—all the effects that give pounding delight to children and adults alike. 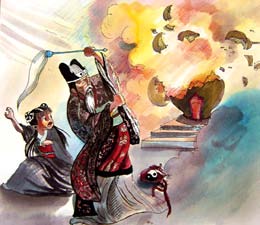 A prevailing legend associates the invention of fireworks with ancient Chinese alchemy.

Liuyang in China is considered the birthplace of fireworks more than fifteen hundred years ago. Legend has it that a cook found that charcoal and sulfur were flammable, especially if contained in a small casing such as a bamboo stick. That was the beginning of an evolution of technology that led to China’s dominance even today as a manufacturer of fireworks.

Firecrackers and fireworks, a most popular traditional game for Chinese kids.

At first, fireworks were used for entertainment and celebration. Their loud noise was also thought to scare away evil spirits. But innovation is rarely contained given time and the human proclivity towards reinvention. The explosive power of fireworks eventually led to the development of gunpowder. The Chinese realized that if the power of the explosion could be directed, it could be adapted as a weapon, such as in rocket-powered arrows. By the Yuan Dynasty (1260–1368 CE) bronze guns were being employed, and warfare was forever changed.

Rocket-propelled arrow. Gunpowder became used on weapons, and was to bring about a revolution in warfare.

Eventually, the use of fireworks migrated west, supposedly carried by Marco Polo, to Italy where the Italians began manufacturing fireworks. Soon the Germans adopted the pyrotechnic device, and from there the popularity of fireworks grew among the nobility in Europe. Fireworks seen for the first time in England announced the marriage of Henry VII in 1486 and Elizabeth I (1533 – 1603) was so taken by the fiery displays that she even named a Fire Master of England to serve in her court.

One interesting fact is that until the 1830s, fireworks showed only white and orange colors. Long considered expert pyro-technicians, the Italians realized that combining metallic salts with potassium chlorate produced a myriad of colors. It is this advancement that gives us the stunning arrays we see today.

2 responses to “The History of Fireworks: Celebrating Life’s Moments in Color, Light and Sound”