Ramadan Observance and the World Cup: A Major Decision for Muslim Athletes 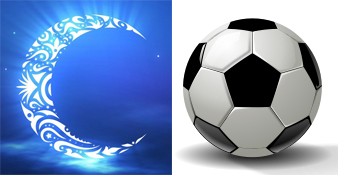 Ramadan, the Muslim month of fasting that is one of the Five Pillars of Islam, begins this Saturday, June 28th. Adult Muslims are required to abstain from food, drink and sexual relations during the daylight hours and instead use the time to refocus their minds and spirits on God while practicing self-sacrifice. This is an extremely daunting task for most people, especially in today’s society where instant gratification is ferociously embraced.  However, for modern Muslim athletes, Ramadan poses an especially large challenge. With major international sporting events taking place such as the World Cup this year and the Summer Olympics in other years, how do the devout observe the month while maintaining such a high level of physical activity?

World Cup stadium Arena Amazonia in Manau,s Brazil in the middle of the Amazon rainforest. Photo courtesy of Chronus.

This Saturday when Ramadan begins, World Cup players will be coping with temperatures over 80 degrees Fahrenheit and humidity over 90 percent. In this weather, they will be running up and down a pitch over 100 yards long for 90 minutes at a time. This is hardly a situation in which to forgo food and water. Athletes must decide how they will reconcile the practice of their faith with the practice of their sport. During the World Cup, the players who are adhering strictly to the code of fasting are encouraged to drink plenty of fluids in the pre-dawn hours, take naps and not train during the hottest part of the day, if possible.[1] Of course, they have no control over whether or not a match is scheduled during the scorching midday in Brazil.

Some athletes maintain that the fasting does not always cause a huge difference in their level of performance. For example, Suleiman Nyambui of Tanzania, who took silver in the 5000 meters at the 1980 Summer Olympics while fasting for Ramadan, said that the fasting really only affects athletes during the first couple of weeks, but that the body becomes used to it eventually and functions normally.[2] Perhaps more importantly he noted, “Once you decide to do something, Allah is behind you.”[3]

Other athletes believe that fasting would be detrimental to their ability to compete and could even be fatal. In 2012, Mazen Aziz, a marathon swimmer representing Egypt in the London Olympics, chose to postpone his fast. He believed that depriving his body of food and water would eliminate his chances for a medal.  Speaking to National Public Radio, he said, “I don’t think anyone can handle that. Anyone…You may die, because you just don’t have anything in your body. Like, empty. So that would be so dangerous.”[4]

In fact, many athletes choose not to observe the strict fast during training and major sporting events. Some World Cup players will fast on most days, but not on the eve of or the actual match day. Others will postpone their fasting until their time in the Cup is done.[5] In 2012, more than 3,000 Muslim athletes competed in the London Olympics, but many of them did not fast. That decision was actually sanctioned by religious authorities.[6] It can be assumed that a similar situation will take place for the World Cup.

It is amazing to realize that as the world watches these highly trained, physically powerful athletes compete on one of the biggest and most important stages of their lives, some of these men are also observing an ancient tradition that could make their fight to win that much more difficult. Regardless of whether the Muslim athletes choose to endure the strictest fast or postpone their fast until after the competition, it is not a decision made lightly.

*For more information on Ramadan and for recipes to use at the end of the month during the breaking of the fast, check out our blog post “Ramadan Ends With Dishes That Celebrate the Heart of Palestinian Cuisine.”

[5] How professional sportsmen cope with Ramadan.

2 responses to “Ramadan Observance and the World Cup: A Major Decision for Muslim Athletes”