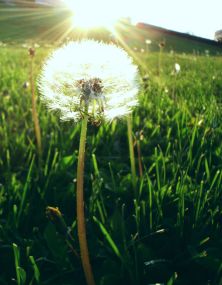 It’s the height of summer in the northern hemisphere where the lazy sun brings us long, hot days of outdoor activities, friends and family, vacations and lots of relaxation. Today it’s just a weed, but once upon a time nothing said summer like the dandelion and the year’s first batch of dandelion wine. Nowadays, we fight these plants to keep them from invading our perfectly manicured summer lawns, but these tiny pieces of sunshine have been valued by many civilizations since ancient times. This week we’re bringing you a recipe for dandelion wine so you can bottle your own bit of sunshine. But first, let’s find out why the dandelion has been so popular through history and how it lost its status in our modern society.

Dandelions—from the Middle French “tooth of the lion” for the shape of its leaves—were prized as a food and medicine by many ancient civilizations including the Greeks, Romans, Egyptians, Chinese and Persians. Theseus, the mythical king of Athens, was said to have eaten a dandelion after he killed the Minotaur.[1] Romans ate the plant and used it medicinally. They spread its use to the Gauls and the Celts.[2] The ancient Egyptians used it to treat kidney and stomach disorders.[3] The Chinese continue to use it in modern times as a medicinal tea.[4] The first people to write extensively about the dandelion and its medicinal uses were Persian physicians from the 10th and 11th centuries CE. They called it either tarashaquq or by its Latin name, Taraxacum, and described it as being like an endive or like chicory.[5] Each civilization used it for its nutritional as well as medicinal value. It has been used for centuries to aid the liver, purify the body of toxins, boost the immune system and cure numerous ailments including baldness, dandruff, toothache, sores, fevers, rotting gums, weakness, lethargy and depression.[6]

Besides being a powerful medicinal plant, the dandelion is a lovely flower that was also appreciated for its beauty. When it was brought to the New World by colonists as medicine and food, it probably also served as a sunny reminder of home in the midst of a difficult situation.[7] The plant was treasured even as lawn care became important over the decades. And then, slowly, green lawns became preferable and the dandelion was reduced to an invasive weed to be eliminated at any cost. Pesticides were employed to rid pristine lawns of the dandelion weed. Thankfully, the plant’s nutritious and healthy benefits weren’t completely forgotten and today it is a cultivated crop around the world. In fact, in Vineland, New Jersey, the official Dandelion Capital of the World, they host an annual seven-course dandelion dinner each spring complete with dandelion wine.[8] Among the dishes served are dandelion meatballs, dandelion salads and dandelion raviolis.

You can enjoy dandelions in a variety of ways. Humans can actually eat every part of the dandelion. The leaves can be boiled like spinach or eaten raw in salads. The roots can also be eaten raw in salads, fried or roasted. The yellow buds can be eaten straight off the stem, ground into flour or of course made into wine.[9] Rich in many essential vitamins, this versatile plant provides such benefits as folic acid, riboflavin, potassium, niacin, vitamin -E and vitamin-C and is a strong antioxidant.

This summer enjoy an ancient delight and distill all of the sights and sounds of summer into a delicious dandelion wine. Here’s a toast to your health!

4 responses to “Bon Appetit Wednesday! Bottle the Taste of Summer with Dandelion Wine”